SUNPOWER: Q&A on green investments business. Is it great?

For this article, we spoke with a keen observer, who attended the recent FY17 results briefing, to learn more about Sunpower:

Q: With its GI projects, Sunpower's business has become capex-intensive. How much is that?

A: About RMB2.3b has been invested or committed to be invested in 2017, 2018 and 2019 in ten projects, four of which are operational. I understand from the management that these projects are fully funded.

Prior to the GI projects, Sunpower's core business of Environmental Equipment Manufacturing (EEM) did not require high capex as it doesn't utilise a lot of heavy machinery; it just needs space and working capital for the purchase of raw materials.

Q: Given the heavy capex for GI, which was apparently profitable in 4Q17, will future cashflow be a concern?

A: We were told that industrial users pay the company in advance for the steam to be piped to their premises. It works on a prepaid stored value model. If they don’t pay in advance, they will not be supplied with steam and this will disrupt their operations. Essentially, customers fund the plants' working capital.

This sounds like a model that should generate a lot of free cash flow, especially in the first few years when the plants are new. And if they provide regularly for maintenance capex, I see no reason why this should not continue well into the future.

Also, we were told that IRR net of debt and tax outflows is 15%, which I think is a superior return, all things considered.

Q: What's your take on the overall business?

A: Green Investment projects are indeed capital intensive but their growth appears to be more scalable than equipment manufacturing, and the returns should be more stable.

In just slightly over one quarter, the GI segment jumped from nothing to 18% of Sunpower's revenue in 4Q17, and accounted for almost 8% of full year revenue.

I also estimate that it was more profitable than the EEM segment for every dollar of assets, and has helped to improve its cash management.

Scalability: Using the Hebei project as the benchmark, which is their flagship plant, we were told by management that the ramp-up from start-up to a high level of utilization as well as profitability took just a few months.

We were also given to understand that adding another boiler takes just a quarter of that time, at a far lower cost and, all conditions being equal, can be expected to generate the same revenue as the first boiler -- all for a fraction of the original investment.

So essentially, we seem to have a favourable situation where the whole plant took 2 years to complete but adding another boiler will take just a quarter of that time, at a far lower cost and can be expected to be as high performing as the first boiler.

That sounds like a scalable model to me.  And it has not yet started selling electricity to the grid or heat to residents, which it should start to do this year. This will bring in more income.

Higher returns: Based on information given by the management during a recent meeting, my estimate of the annualized ROA (return on assets) from the four currently operating GI plants is already much better than the group ROA since 2010, which has not exceeded 6% and averaged only 3%.

In fact, I think I have been conservative in my estimate because I used 4Q17 as a benchmark when it is not yet steady state. The performance may improve further in future.

Cash flow: The following chart will show you how much its cash management has improved in 4Q17, GI's maiden quarter. 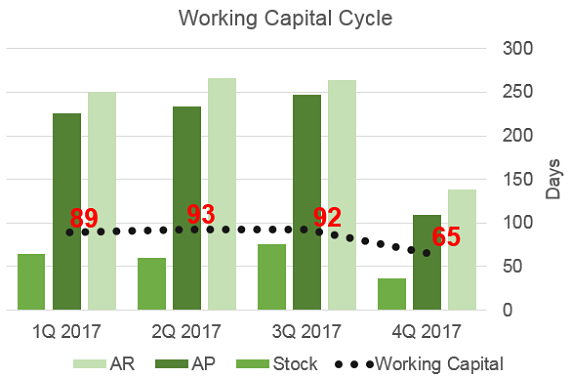 Source: Sunpower published data
It's an encouraging start and, more importantly, it raises the prospect that more investors will come looking for Sunpower in the future as the company proves that it can generate high-quality, reliable cash flow.

If so, I reckon Sunpower will be able to grow even faster as it moves quickly to take advantage of the superior returns that are only open to early movers.

Q: What about the risks?

A: Arguably, the risks for the GI segment are lower than for the EEM business, and more factors are in Sunpower's control. For EEM, the order book and margins depend on external factors like oil price, domestic and world economic conditions, raw material prices, etc.

For GI, it appears to be able to influence and reduce a lot of the risk factors. For instance, it controls costs through its "circular economy" business model:

-- it uses waste water and sludge from water treatment plants nearby to reduce its water and coal usage; and

-- it can sell its own waste products like ammonium nitrate and ash to users in the industrial park.

In addition,
-- it has a coal cost transfer mechanism to users that is agreed upon in advance;

-- it is subsidised by the government when it sells power and heat to residents; and

-- it ring-fences its risk of demand volatility by focusing on industrial parks with a lot of stable users such as those that produce household products, and print & dye, instead of cyclical or seasonal industries such as electronics.

We have 1687 guests and no members online