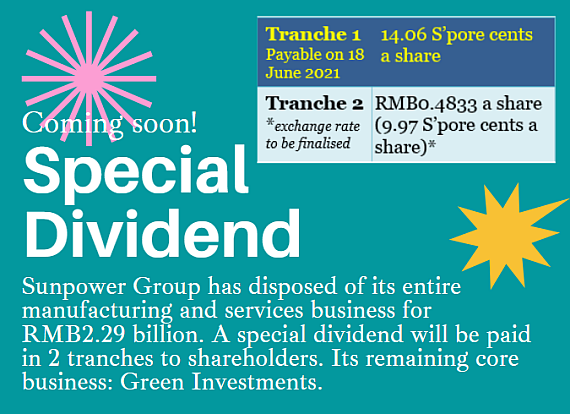 1Q21 performance review. It was a good start for Sunpower in FY21. The improvement in profitability was mainly due to the contribution of Shantou Phase 1 project which commenced in 4Q20.

During the period, developing countries in South and Southeast Asia still suffered from rising COVID infections. China’s export of goods and services surged as it was one of the few countries which maintained normalised production activities. We believe tailwinds will continue at least until 3Q21.

Valuation & Action: We maintain an OUTPERFORM rating with an upgraded target price of $$1.53 (ex-dividend S$1.29) based on each project’s discounted cash flows and the special dividend declared of S$0.2359 per share.

Risks: The surge in coal prices could lead to a short-term margin compression. Although Sunpower can pass the markup in costs to customers in the long run, the performance volatility will increase for certain months. Meanwhile, rising interest rates and financing costs due to inflation expectation could lower project rate of returns.

The good news for both the company and shareholders this year was the restructuring of the business by divesting the manufacturing and services segment (refer to our previous report for detailed analysis).

At this juncture, shareholders should see the bigger picture of the company as it undergoes its transformation process.

Before 2014, the company’s main business was equipment manufacturing, engineering, procurement, and construction, which was integrated in M&S in 2018. In 2015, the group stepped into green investment (GI) which engaged in utilities projects.

Over the past 5 years, revenue contribution from GI has been increasing, and as of FY20, GI revenue accounted for 32.9% of total revenue (FY16: Nil, FY17: 7.7%). As a result, Sunpower had two engines of growth to drive the overall business.

To understand why management decided to switch back to one (better) engine business model, investors need to understand the core features of and differences between the two.

M&S is an order book-driven business. Although the segment secured a record high order book of RMB2.8bn before the divestment was announced, it suffered from low growth during 2014 and 2015 when oil market crashed.

During the years of oil recovery, the segment consistently secured large-size contracts. Hence, the segment performance is cyclical in line with market capital expenditure conditions due to its heavy exposure to the petrochemical sector.

However, the era of clean energy has come, squeezing the growth of the petrochemical industry as talent and capital will gradually shift out. To put simply, the heydays are gone for the industry.

In terms of profitability, M&S is not comparable to high-end manufacturing like semiconductor, precise engineering, and robotics.

The net margin of M&S is mid- to high-single digit. On the other hand, GI provides better growth and visibility.

The projects under GI own quality assets, with the average internal rate of return of more than 15%, and payback period of around eight years (concession period: 30 years). More importantly, these assets are profit-making and generating consistent positive operating cash flows.

Not only does GI have organic growth by expanding and upgrading of existing plants owing to the increase in demand from new customers, but it also has inorganic growth by acquiring new projects.

We have 1104 guests and no members online