SUNPOWER: Recurring revenue from green investments "to start ramping up in FY18" 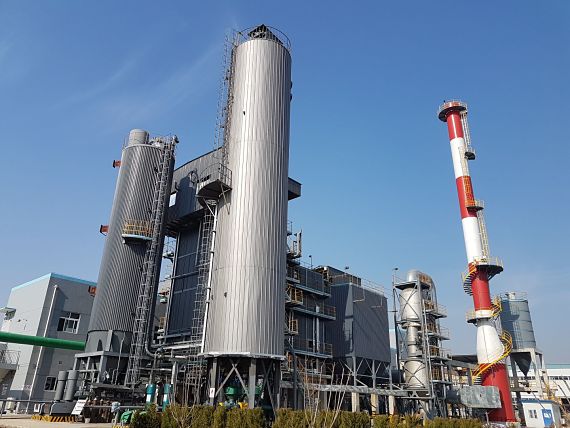 Sunpower's centralised steam plant in Quanjiao in Anhui province is so clean that there is no visible emission from the smoke stack at all.
Photo: Company

Sunpower Group is among a rare breed of S-chips that have been listed on the Singapore Exchange for more than 10 years. It was listed in 2005.A major addition to its business -- green investments -- took place in 2016 (see: SUNPOWER: Using proprietary technology to help solve China's smog pollution).

It then attracted, just about a year ago, a US$106 million net cash investment from CDH Investments via the issue of convertible bonds.

CDH is a significant Chinese investor with about US$19 billion worth of assets under management.

When CDH made its investment in Sunpower, the latter had already secured 3 BOT centralized steam and electricity projects in Hebei, Jiangsu and Anhui.

Some of the CDH money has gone into Sunpower's projects which now have grown to seven.

While these projects will ramp up progressively, a fourth project -- the Xinyuan Thermal Power Plant -- will contribute fully in 2018 when the acquisition is consolidated into the group's results. Sunpower announced the acquisition from a third party in Nov 2017. "Well-positioned to improve shareholder value. GI (green investments) segment is expected to start ramping up in FY18," says Sunpower in its Powerpoint presentation.

This year, Sunpower will be working towards a profit target of RMB400 million, as set out in its agreement with CDH when the latter subscribed for the bonds. See: SUNPOWER: S-chip share price at record high, heading for record profit

If Sunpower fails to achieve at least RMB360,000, the bond conversion price will be adjusted lower for CDH. See details here.

Thus far, Sunpower's original 2 core segments has a track record of stable order book despite being project-based because about 70% of their customers are repeat customers.

Sunpower says it has long-term partnerships with renowned conglomerates such as BASF, Yantai Wanhua, etc.

-        Slower-than-expected expansion of the industrial parks or user base in the vicinities of Sunpower’s plants. However, Sunpower says it performs careful due diligence prior to investing in the plants. Moreover, most of the plants are in developed or fast-developing industrial parks.

-       China intends to increase the contribution of natural gas to the energy mix as one of the ways to combat pollution in the long term. However, coal is likely to remain the most widely-used fuel source, especially when combined with technologies that reduce harmful emissions, due to its lower cost and plentiful supply.

We have 1363 guests and no members online