At 47% of our FY14 forecast, 1HFY6/14 core net profit of US$15.1m (-10% yoy) was in line with our expectations (13% below consensus). Higher day rates and utilisation helped offset the shipyard overheads. 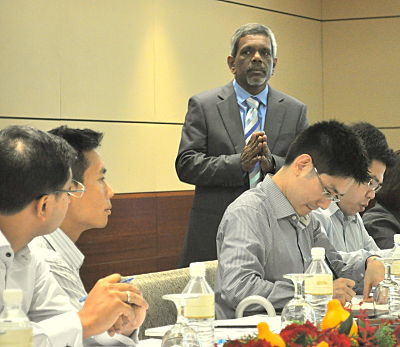 Jaya CEO Venkatraman Sheshashayee taking questions from analysts and fund managers at a briefing. NextInsight file photoThe group also declared an interim DPS of 1Scts, double that of 1HFY13. We lower our FY14 EPS by 2% due to higher shipyard losses, while raising our FY15-16 by 2-4% to factor in higher day rates. Jaya remains an Add with an unchanged target price, still at 1x CY14 P/BV (its four-year mean). Potential catalysts are stronger chartering operations, shipbuilding wins and clarity on its strategic review.
2QFY14: smooth sailing
Excluding one-time charges and gains from vessel sales, 2QFY14 net profit rose 16% yoy to US$7.3m due to stronger chartering operations. Aided by higher day rates and utilisation (2QFY14: 83% vs. 2QFY13: 80%), chartering earnings increased by 23% yoy to US$10.2m. Stronger chartering offset the shipbuilding losses of US$2.7m (2QFY13: US$1.3m loss). It expensed a higher proportion of overheads in 3QFY14 as there were only five vessels under construction vs. eight in 2QFY13. Chartering order book rose 82% yoy to US$320m.
Looking ahead at 3QFY14
Jaya has guided for healthy utilisation rates in 3QFY14 as it mitigates the impact of Southeast Asian monsoon season by deploying three of its vessels to Saudi Arabia. Further, it expects to sell one 16,000bhp AHTS (Jaya Sovereign) and one 5,000bhp AHTS in 3Q. The group expects to record disposal gains of US$3m, which should stymie the shipbuilding losses in the third quarter.
Maintain Add
Jaya's share price has moved up recently on speculation of a potential takeover or change in major shareholders. As we are unable to verify the market talk, instead, we ask, “What is it that makes Jaya an attractive takeover target?” Here, we find a company that has successfully refocused from speculative shipbuilding to a vessel charterer with steady, recurring earnings.

In all, Jaya is a net-cash, strong cash-generative company with a good fleet mix and attractive valuations. These factors support our Add rating. 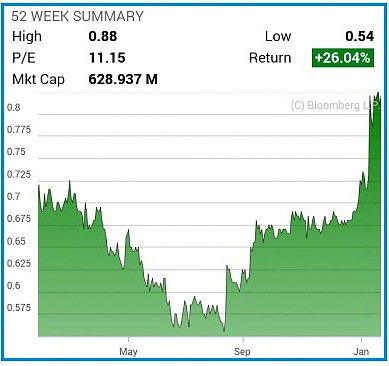 Jaya Holdings chart: BloombergJaya reported another steady quarter with net profit of US$7.2m for 2Q-FY14, up about 16% y-o-y (excluding vessel disposal gains) on a 31% y-o-y improvement in chartering revenue.

We have 1839 guests and no members online