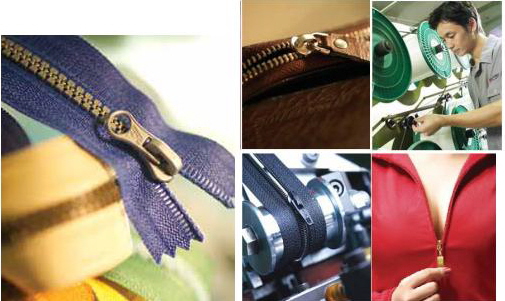 Fuxing is now the No.2 largest zipper producer in China

Proposed acquisition of Rmb372m. After more than a year of discussion and negotiation, the group finally fixed the price of Rmb372m to acquire three companies which are mainly engaged in the dyeing and electroplating services. This will bring the group a big step closer to Fujian SBS Zipper (Xunxing), the largest zipper manufacturer in China.

What impact? We believe the impact of the acquisitions will be positive. Fuxing will become the second zipper manufacturer with fully vertically-integrated capability in China after Xunxing. By capturing operational synergies arising from the value-added services, the company will be able to enhance its competitive advantage. Management believes the acquisitions are in line with their long-term growth strategy. This will make them operationally stronger, allow the group to capture viable revenue streams and expand its profit base.

What is the valuation? The group is paying about 10x historical FY09 PER or 4.1x PBR for the whole acquisitions. We view the valuation is reasonable as these dyeing and electroplating companies have been running at high utilisation rate since the onset of the financial crisis, mainly due to the stringent business licensing and less competition.

Goldman Sachs is neutral on WILMAR in its China property venture

On December 21, Wilmar announced that it has entered into a master joint venture (JV) agreement with Kerry Properties (China) and Shangri-La China to establish one or more JV companies for real estate development and management in Bayuquan, Yingkou City, Liaoning Province, China.

This agreement follows a successful bid for 3 sites in Bayuquan for RMB240mn (approximately US$36mn), designated for residential, commercial and hotel use. Wilmar’s investment for the project sites is approximately US$134mn, based on its 35% stake.

Wilmar and its JV partners are searching for other suitable sites in China and may jointly bid for such sites in the future. 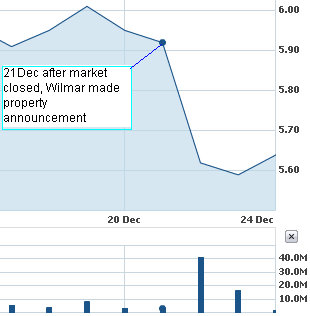 Wilmar shares have fallen since the after-market Dec 21 announcement. They closed down 3 cents yesterday (Monday) at $5.61

In our view, there are some synergies for Wilmar’s investments into property development in China, especially for the smaller 2nd and 3rd tier cities where Wilmar has operations.

In some cases, Wilmar’s investments may be a strong driver of economic development at these smaller cities (e.g. if it builds factories and ports), and Wilmar may also be able to leverage on its strong local knowledge and business networks to implement the development.

However, we believe that investors’ initial reaction may be negative – this appears to be a sharp departure from Wilmar’s agri-processing core business and there may be concerns on management losing focus.

We believe that the market may take this announcement negatively. No change to our earnings estimates, target price or Neutral rating.

We have 550 guests and one member online