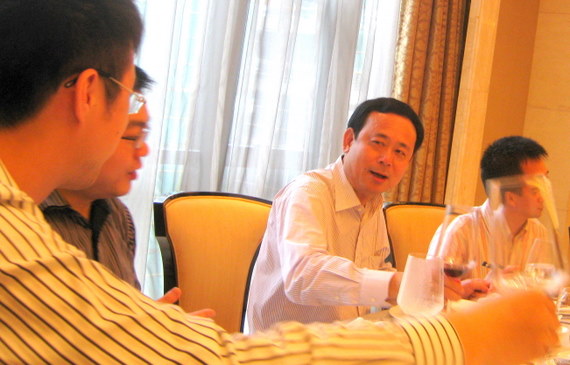 Meanwhile, the company recently announced it is considering a share sale in Taiwan. 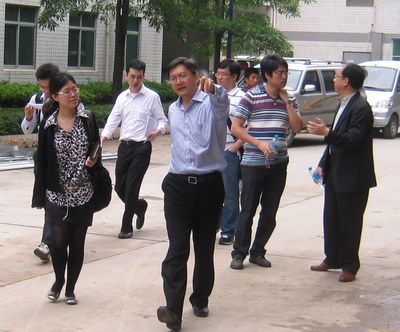 The fund managers, who hailed from Singapore, Hong Kong and the PRC, were initially interested to know how Fuxing’s competitors in the garment fastening industry stacked up against the Singapore-listed firm’s zippers.

Mr. Hong added that the company was second to only one in the PRC market, and its rise to become the world’s third biggest zipper maker and No.2 in Mainland China had earned Fuxing many strategic advantages.

“Thanks to our constant hunt for advantageous pickups as well as organic expansion, we enjoy the benefit of economies of scale.”

As proof of this, Fuxing China in December 2010 acquired three firms -- dyeing, yarn and electroplating firms -- for a total of 372 mln yuan. 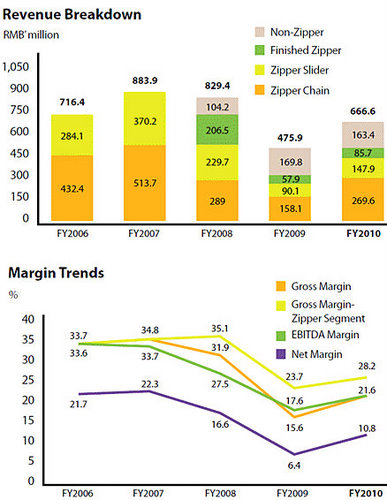 “We are continuing to market our Super Durable Zippers, and we target to increase sales of finished zippers to 20-25% of our total top line from under 20% currently,” says Fuxing China Group Chairman and CEO Mr. Hong Qing Liang.

He said this helped the company contend with rising raw material and labor costs.

In fact, Fuxing was currently building a large 25 mln yuan combined production facility/dormitory in the heart of its manufacturing complex in the city of Jinjiang, located in central Fujian Province.

“Already we have begun production on the second floor,” Mr. Hong added, pointing up to a well lit large windowed workspace already abuzz with activity.

“In addition, we have traditional zipper production lines worth 15 mln yuan currently under construction,” he said.

The company was not wed to either organic or M&A-led expansion, but would consider all plans separately and judge them by their individual merits.

“We are constantly exploring the landscape for new M&A opportunities, and in fact we are seriously looking at two zipper companies as we speak,” Mr. Hong said.

“We will continue to expand capacity via M&As or organically -- whichever is more beneficial to our long-term strategic interests.”

He said that the company was constantly striving to increase the proportion of finished zipper sets – especially its Super Durable Zippers (SDZs) – as a percentage of revenue as margins were considerably higher.

“We are continuing to market our Super Durable Zippers, and we target to increase sales of finished zippers to 20-25% of our total top line from under 20% currently.”

He added that Fuxing was tireless in its efforts to improve overall operating efficiency, streamline process automation and enhance brand name recognition.

“These efforts have paid off and we expect positive contributions from our Shanghai and Qingdao plants for this year,” he said of two recently loss-making production units north of the company’s Fujian headquarters. 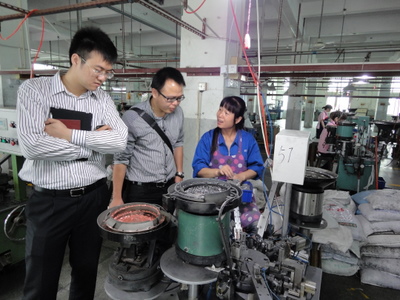 Some of the fund managers on the Aries Consulting-organized tour of Fuxing's Fujian facilities last week.  Photo: Mark Lee

Having been listed in Singapore since September 2007, Fuxing China was pondering a move that is becoming increasingly commonplace for S-chips – selling shares in Taiwan.

Mr. Hong said that no final decision had been made on whether to go through with listing Taiwan Depository Receipts (TDRs) in Taipei, but he did enumerate many of the benefits of such a proposed move.

“The Proposed TDR listing will broaden and diversify the shareholder base of the company, provide an additional fund-raising platform, create a new listing platform and may provide a different perspective to the valuation of the Group and better liquidity for the company’s shares,” he said.

Indeed, the company was no doubt interested in bringing its share price (currently flirting with 52-week lows) more in line with its recent strong financial performance. 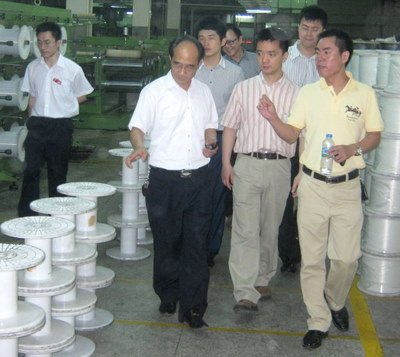 He added that the proposed TDR Listing would “enhance and promote public awareness of Fuxing China Group and its “3F” zipper brand in Taiwan.

“This may assist the Group’s business development in Taiwan.”

He said that in preparation for the possible TDR sale, Fuxing has appointed Taiwan-based SinoPac Securities Corp as a financial adviser to provide advisory services on the proposed TDR listing.

Mr. Hong added that the company’s board would further update shareholders and the investing public from time to time on any major development of the proposed TDR listing.

“Recently we have witnessed a recovery in demand in both the PRC and export markets,” Mr. Hong said. 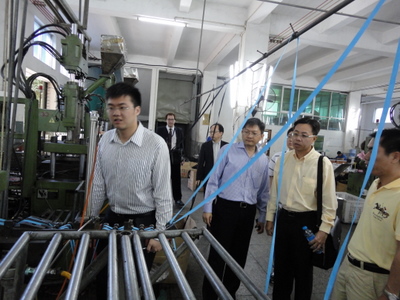 Results in the first quarter generally surprised on the upside thanks to improving utilization and higher average selling prices, which helped to lift gross profit margins.

“With the gradual recovery of the PRC and global economies, driven by the Chinese government’s supportive measures to stimulate domestic demand, the consumer market and the textile and garment industry saw steady growth in 2010 and in the first quarter of this year.

He said that as disposable incomes in the PRC rise alongside urbanization and economic growth, Fuxing China believes the trend of rising domestic consumption will continue to grow and lift the zipper industry.

“We believe there are opportunities for acquisitions of zipper plants in other provinces, such as Hubei, Sichuan, and Guangdong, that will help accelerate growth.

“We will exert more effort in obtaining direct customers by providing fast and customized services through our Jinjiang, Shanghai and Qingdao production bases, and we will keep our salary packages attractive and provide more comfortable working and living environments for staff.”

Mr. Hong added that financially, Fuxing was in good shape.

“The group has also secured short-term and flexible loans to facilitate its working capital needs and make prepayment to suppliers to secure a stable stream of raw material supplies at competitive prices.”

We have 1237 guests and no members online