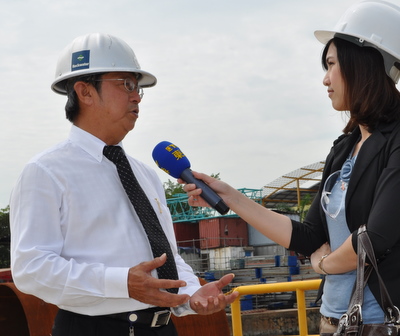 Technics executive chairman Robin Ting.
NextInsight file photoTechnics Oil and Gas Limited, a leading full service integrator of compression systems and process modules for the global offshore oil and gas sector, announced on 9 July that it has been awarded contracts worth a total of S$6.2 million.

They involve the supply of a Gas Booster Compressor for the production facilities and gas compressor skid of a FSO vapor recovery project in Vietnam.

The Group’s order momentum has been strong.

>> On 27 May, it was awarded contracts worth a combined S$7.4 million for the supply of a Booster Compressor package for a wellhead platform deployed in Vietnam and an EPCI for steel structure.

>> On 12 Nov 2013, it was awarded the 2nd leasing contract and outright sales contract worth a total of S$10.1 million for 9 Reciprocating Gas Compressor Engine-Driven packages deployed in Indonesia and Malaysia.

>> On 4 Nov 2013, its 40.2%-owned subsidiary, Norr Offshore Group, was awarded its first Micro LNG plant project worth S$21.0 million for the supply of process equipment & accessories deployed in Indonesia.

>> On 27 May 2013, it was awarded contracts for the supply of Air Spread Systems for deployment in Singapore worth S$10.6 million.

“Our recent successes in EPCC and CE project delivery in several countries in the region has won for us more interest and support from large multi-national corporations,” said executive chairman Robin Ting.

The latest contracts are not expected to have a positive material impact on Technics’ earnings for the financial year ending September 2014.

We have 249 guests and no members online