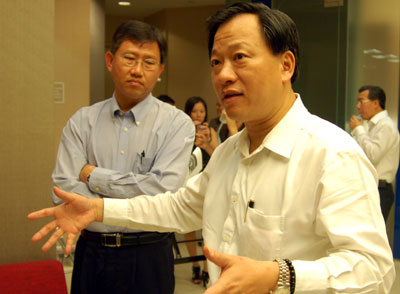 Derek Goh, chairman & CEO of Serial System, speaking with investors. File photo: Sim Kih
YET ANOTHER Singapore-listed company is seeking a foreign dual listing in order to raise funds and achieve a better valuation for its Singapore-listed shares.

Serial System, a distributor of semiconductors and electronic components, today said it intends to offer and list Taiwan Depository Receipts (TDRs) of up to 90 million new ordinary shares.

It joins 7 other Singapore-listed companies which have announced their TDR plans and are waiting to be listed.

All these companies’ stock price performance since the announcement of their TDR plans were the subject of a Business Times article yesterday.

A key conclusion: the launch of the TDRs appears to have improved the valuation of the companies. All the companies that have launched TDRs or announced plans for TDRs have shown an improvement in their price-to-book ratio and price-earnings multiples.

BT said this could be due to the improvement in the general market sentiment. Still, based on the few companies studied, chances of out-performance outweigh under-performance. So from that perspective, TDRs are not a futile exercise after all. 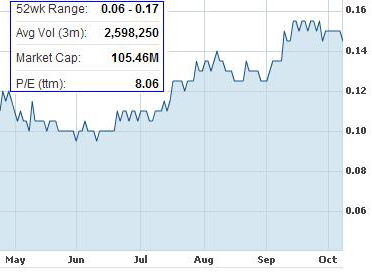 Serial stock has soared 142% since the start of the year, from 6 cts to 14.5 cts.
Serial statistics

Serial reported a 0.89 cent earnings per share for the half year ended June, a sharp jump from 0.19 cents in the previous corresponding period.

The annualized EPS is 1.78 cents, which translates into a PE of 8.1X based on the recent stock closing price of 14.5 cents.

We have 500 guests and 4 members online