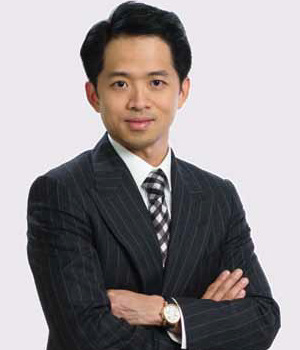 Stephen Le, 36, has been JAYA's chairman since March 2011. He is a MD and head of Deutsche Bank's Strategic Investment Group in Asia Pacific. Photo: annual report

JAYA HOLDINGS' chairman, Stephen Le, in his opening remarks, said the new board of directors and management had achieved key objectives they set for FY12 (ended June 30).

1. Growing its ship-chartering business (increase the utilisation rate of its vessel fleet, expand the fleet, and raise revenue).

2. Its shipyard would build ships for third-party customers and cease speculative shipbuilding.

In addition, Jaya has beefed up its senior management with 3 new hires, including a new CEO, Mr Venkatraman Sheshashayee.

Financial-wise, it has climbed out further from the dire circumstances it fell into in 2009, ending FY12 with US$200 million in cash, and just 9% gearing. The happy position arose from cost-cutting and optimised use of its vessels, said Mr Le.

The group's FY12 revenue was down 17% and net profit down by 33%. Net profit would have been even lower if not for a US$10.2 million reversal of impairment losses and provisions and if not for a US$11.4 million adjustment for over-provision of tax in previous years.

In looking at the reported FY12 net profit of US$43.8 million, consider also that there were lower vessel sales (US$7.2 million versus US$46.7 million). 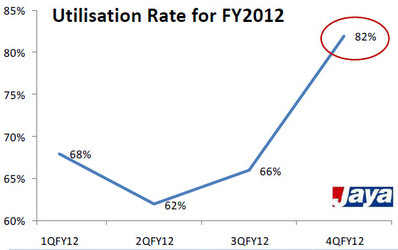 "This is what you will see when you move from an asset trading strategy," said Mr Le.

Using an analogy for the 100 or so shareholders at the AGM, he said that instead of owning a fleet of cars that you sell when the profits are high, "we are trying to make sure the cars get good customers for 3 years and good rentals, and get the market to value our company as an ongoing business."

"Why is that important? In the past, the market has priced Jaya at a discount to its book value," he said. 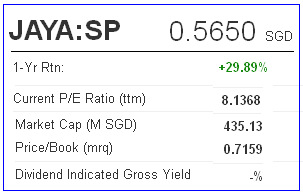 Mr Le highlighted an indicator of success to date -- Jaya's share price at 56 cents recently was up about 25% year to date, outperforming major indices such as the Straits Times Index which was up 15%.

In July 2012, the Group announced that it had secured building contracts of US$85 million for two vessels.

These are scheduled to be delivered in 1QFY13 (ie July-Sept 2012 quarter) -- but Mr Le would not confirm when asked if the deliveries had already taken place.

Saying this was price-sensitive information, he asked shareholders to wait for the upcoming 1Q2013 results announcement.

On the shipchartering side, the Group has built up its contracts pipeline to US$198 million.

More positive developments are hoped for by shareholders, one of whom stood up to say the nearly-S$400,000 of shares he bought in 2006 are worth only S$100,000 currently.

And he groused that he had received no dividend for three consecutive years.

(Dividends for the good years FY06, FY07 and FY08 were 9 cents, 10.5 cents and 13 cents a share, respectively. Amid the global financial crisis, Jaya paid an interim dividend of 1 cent only for FY09 before stopping altogether.)

Shareholder: Has Jaya achieved any shipbuilding orders from its collaboration with IHC Merwede?

Mr Le replied that the collaboration is only just about 3 months old, and has not led to any shipbuilding order yet for Jaya. 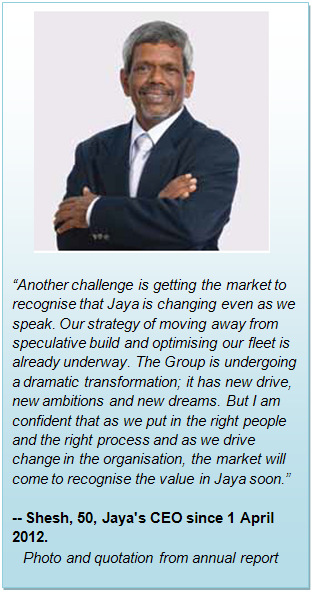 Mr Shesh, the CEO, said there is strong demand for new and high-specification support vessels but customers are finding it a challenge to obtain financing amid the economic uncertainty created by the eurozone crisis, among others.

Q: Why is no dividend proposed for FY12?

Mr Le said Jaya is under a scheme of arrangement which restricts it from paying a dividend. The company plans to exit this scheme at some point in the future.

With a cash balance of US$200 million and a gearing of just 9%, "the company is in a good position to refinance the debt at some point in time," he said. "Once this is resolved, we should be able to pay dividends -- hopefully at the next AGM or in the future."

Q: In the annual report, it can be seen that the last vessel delivery from Jaya is April 2014. So will there be vessel building beyond that date?

Mr Shesh said there would be, and reiterated it would not be speculative building. At this point, Jaya does not have any third-party order for new vessel to be delivered beyond April 2014.

Q: In each of FY13 and FY14, six vessels are expected to be completed. What would be the utilisation rates for the shipyard in those years?

Q: In view of the near-disaster that this company fell into in 2009, partly from being over-geared, what is the limit on the gearing that Jaya has set for itself?

Mr Le said the board has a risk committee to look at issues such as gearing. "Be rest assured that many pairs of eyes are looking at concerns that you raise. We intend that the company not just do not over-gear but also can grow on a sustainable debt loading.

"Once we emerge out of the scheme, there will be a lot more clarity around what the new debt convenants will be. Debt is important for capital intensive businesses. The new lenders will be equally concerned and there will be convenants on the loading level.These are natural controls."


> For in-depth stuff on some of the topics, including the history of Jaya's debt trouble and subsequent rescue by a consortium of investors, you can read CIMB's excellent report dated 6 Sept 2012 here.

> For more on Shesh, read this story on AsiaOne.

0 #2 Keith 2012-12-09 02:43
Jaya has successfully secured more customers for its charter vessels and at higher rates. This is the core of its business, in addition to building of support vessels.

The big boost to its stock price is something else -- ie, its venture with IHC. The first piece of concrete business from this partnership should cause the market to get excited about the stock. It would crystallise the synergies of the venture and investors would chase the stock again. Should be a good idea to buy ahead of this impending turn of events.
Quote
0 #1 Goolo 2012-10-27 05:11
FY12 profit was boosted by a reversal of provision and tax write-back. What's looking good is the cash flow + paring down of debt + a near-certainty that Jaya is on the way to become net cash. The intangible success, if it can be called that, is a change in investors' perception of its risk profile (specifically, no speculative shipbuilding) and the invisible hands of Deutsche at work. If they can refinance their debt and are liberated from the no-dividend bind, the stock can move up (assuming there is no down turn in the core business). Just my 2 cts worth -- dissenting views are most welcome. Vested
Quote
Refresh comments list
NextInsight.net

We have 2725 guests and no members online