This chart, with explanatory notes below, illustrates the impact of thermal coal last year and recently on profitability: 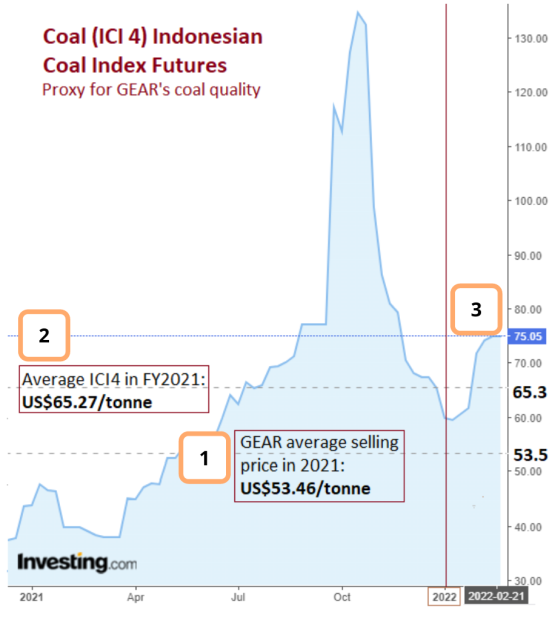 2. The ASP was a discount to the average ICI4 in FY2021 of US$65.27 per tonne (FY2020: US$29.43 per tonne) due to the  Indonesian government's domestic sales obligations on coal miners. They are required to supply 25% of their annual production locally at a capped price.

3. Last week, the ICI4 index hovered at US$75/tonne level. This is well above the average ICI4 index for the entire year of 2021, pointing to a sustained high profitability outlook.

Meanwhile, another boom period was experienced in the coking coal sector in 2021, which benefitted ASX-listed Stanmore Resources, an Australian indirect subsidiary of GEAR.

Stanmore produces coking coal (also known as metallurgical coal) which is used in the production of steel.

GEAR has another exposure in Australia -- to unlisted goal miner Ravenswood Gold through a 50-50 JV, which is expected to contribute improved performance in 2H2022 after its current expansion works are completed.

The near-term transformation of the profile of Stanmore and, by extension, GEAR is illustrated below: 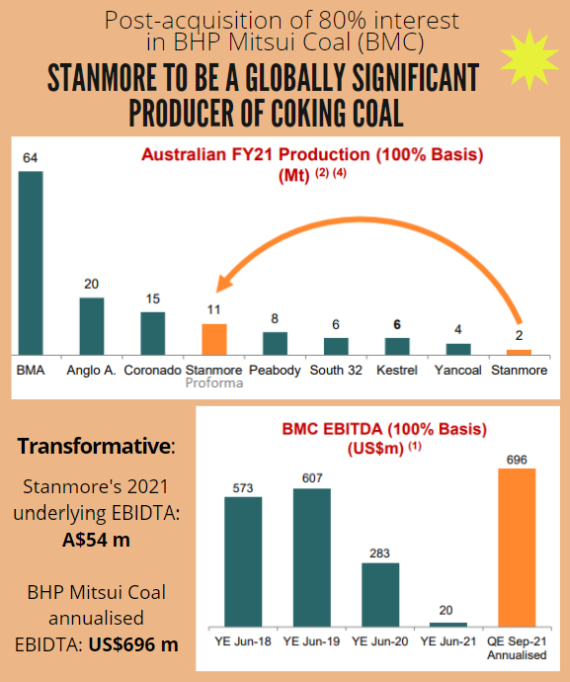 Completion of the transaction is expected to occur in mid-2022.

Stanmore plans to fund up to US$600 million of the US$1.35 billion purchase price via a rights issue whose details are yet to be finalised.

GEAR has committed to subscribe, through its 100% owned Golden Investments, for up to US$300 million of its entitlements but reserves the right to subscribe up to its full entitlement.

GEAR, which had US$379 million in cash on a group basis as at end-2021, is seeking to top that up through a proposed share placement.

Such figures may look imposing but there is substantial cashflow and quick returns to come for Stanmore from a deal where the seller's (BHP) intent is to pivot away from fossil fuels.

We have 1097 guests and no members online