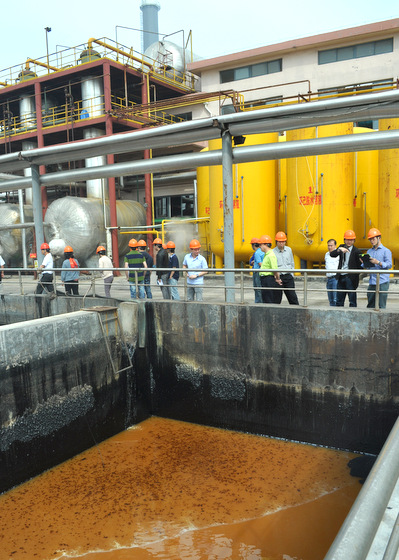 Production of rubber chemicals leads to pollutive discharge. At China Sunsine, the effluent is treated and then piped to a government central treatment site for further treatment. NextInsight file photo.+ Uptrend in ASP and sales volume continued in 2Q18: In 2Q18, the total sales volume grew 8.7% YoY to 37.6k tonnes, due to higher production of insoluble sulphur and antioxidant.

The significant improvements of margins were attributed to the growth of ASP outpaced that of raw material costs resulting from the tight supply within the market.

Negatives
- New capacity is expected to get approval by 3Q18: The trial run of the respective 10ktonne newly-added capacity of accelerator TBBS and insoluble sulphur plant will be postponed to 3Q18. Hence, both plants could commence a full operation by 4Q18.

CSSC achieved stellar performance in 2Q/1H18 due mainly to the shortage of rubber chemicals.

Hence, ASP maintained at an elevated level. On the other hand, aniline price has been trending down due to more supply entering the market.

Moving forward, we believe the supply shortage will be relieved as new capacities start to enter the market, together with more supply of aniline due to exporters partially shift US exports back to the domestic market.

As a result, ASP correction could start in 3Q18. In 2H18, we expect CSSC to maintain GPM at more than 30%. We expect CSSC to deliver healthy performance for the next two quarters.

The room for growth will come from the new capacity which can help maintain performance and offset the softer chemical prices. Besides, “Battle for a Blue Sky” could be a short-term negative impact but a long-term beneficial driver.

More environmental inspections will cause temporary disruption on operation in the industry, but it will gradually phase out uncompetitive and unperformed manufacturers. Therefore, CSSC will consolidate its market position as a leading supplier.

We have 1084 guests and no members online