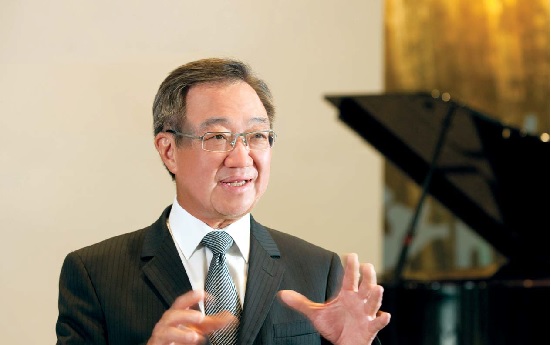 Raffles Medical executive chairman, Dr Loo Choon Yong, reminisces about his medical journey, and reveals how to maintain the competitive edge in healthcare.

All photos from Raffles Medical Group

The following is the first of a two-part feature on Raffles Medical Executive Chairman, Dr Loo Choon Yong, which was published in the Nov 2013 edition of SMA News. It is republished with permission from the Singapore Medical Association.

Dr Loo Choon Yong was awarded Businessman of the Year 2012 at the Singapore Business Awards 2013 ceremony in April last year. Although the Executive Chairman of Raffles Medical Group proudly received this award, he was initially apprehensive that the award could cause the misconception that Raffles Medical Group was more profit driven than patient-driven.

But to those who knew him, it should come as no surprise that Dr Loo is rightfully one of the top businessmen in Singapore, having displayed fine business acumen since his childhood days, coupled with a steadfast belief in starting a practice with the right principles. Since its founding in 1976, Raffles Medical Group has blossomed under Dr Loo’s leadership, and he emphasises that as long as doctors “look after the patients, the business will look after itself ”.

Dr Loo reminisces about his medical journey in this interview with the Singapore Medical Association.

Dr Toh Han Chong – THC: Could you tell us more about your memories growing up – as a young boy and then during medical school?

Dr Loo Choon Yong – LCY: I grew up very poor back in the 1950s, so life started very early for me.

When I was five or six years old, I was already helping my mother at her stall in a school canteen. I used to travel by bus to old Rochor Road to buy items for the stall and return by trishaw to the school at Jalan Sultan. Stocking up for her stall was commonsensical; I bought items that were in demand and sold them to students who were around my age.

That was my first mini “Master of Business Administration”. (laughs) I completed my primary education at Presbyterian Boys’ School (PBS), my father’s alma mater. Being a good student, I was second in standard at PBS every year.

When it was time to choose a secondary school after the Primary School Leaving Examination, my teacher, Mr Wee Seng Hiok – who was coincidentally my father’s classmate in PBS – advised me to place Raffles Institution (RI) as my first choice instead of Presbyterian High School, which was my father’s top choice. Thanks to Mr Wee – to whom I am forever indebted – my father eventually agreed, and that was how I ended up in RI.

At RI, I found myself among many smart students, mostly from neighbourhood primary schools, so we often challenged and competed with one another. As I did well for my Secondary 2 examination, I was posted to class 3A, which comprised the top 40 students in the standard – the cream of the crop. I remember we once had a teacher with a master’s in Mathematics from the US, who unfortunately was not adept at explaining certain Additional Mathematics concepts. As such, the whole class flunked our first test – everyone, including the teacher, was shocked. 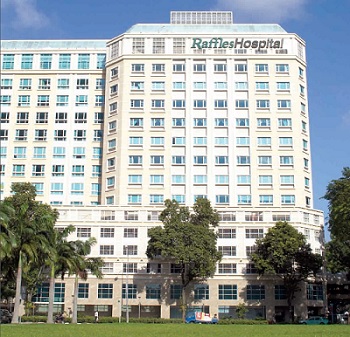 Raffles Medical runs a network of 74 multi-disciplinary clinics across Singapore, and four medical centres in Hong Kong and Shanghai.
Above: its flagship Raffles Hospital at Bugis.

Since we had a teacher who couldn’t teach, and being RI boys, we began to study these mathematical concepts by applying reverse engineering on worked examples. Then we tested our logic by working on practice questions and checking the answers.

With every correct answer derived, we were able to confirm that our imputed logic was working; in short, we were testing our hypotheses and learning concepts on our own – this is, I believe, one of the trademarks of smart kids.

Of course, nowadays the Internet makes it easier for people to self-learn and search for answers online, but it was not so back in my time.

As a young boy, my interest did not lie in Medicine. I was more interested in Physics and Mathematics, but my father felt that I would end up lecturing these subjects, as the prospects of working with more exciting things like nuclear energy was slim. Medicine, on the other hand, was a more financially sound option, as he had never heard of a poor doctor.

He reasoned that if I became a doctor, I could help support my siblings and see them through university. You see, there were seven children in the family, so my parents had to work very hard – my father held several jobs and only took a day off from work on Sunday. All my siblings and I also had to do housework on top of our homework, and we definitely did not have tuition then. (laughs) So, when my father asked me to take up Medicine, I agreed, to fulfill a duty to the family.

During medical school, I spent a lot of time in student political activities. When I became the President of the Democratic Socialist Club in my second year of medical school, I attended a conference in Rome – my first ever overseas trip (ironically, I became Singapore’s ambassador to Italy many years later).

During the conference, I worked hard as the rapporteur of one commission, and was subsequently elected into the executive committee of the International Union of Socialist Youth.

As a result, I had to travel to Vienna every six months. As a young political student leader still in medical school, these trips allowed me to gain a lot of experience as well as meet various politicians, such as Golda Meir, Abba Eban, Harold Wilson, Willy Brandt, Helmut Schmidt, and even Olof Palme, who was later sadly assassinated in Sweden.

Those were great experiences that money cannot buy. I got down to seriously studying Medicine only after graduating from medical school and upon my return from conferences. Due to my travels, I was two months late for my housemanship, so my friends fixed me up for my first night at Ward 16, a surgical intensive care unit at Singapore General Hospital. That night, I became a real medical student – performing urgent medical procedures and seeing people die, I thought to myself, “You better know what you are doing, as the guy lying there needs you.” After that, I found the motivation to study Medicine that wasn’t there before.

THC: While you were building the Raffles Medical enterprise, were there any difficult moments or setbacks that made you stronger?

LCY: I experienced many setbacks! A commemorative book called A Journey of Faith was put together for Raffles’ 30th anniversary celebrations. The rationale behind the book title was because the Asian financial crisis which hit Singapore in 1998 almost thwarted our plans for Raffles Hospital. In light of the financial uncer tainty, our joint venture partner Pidemco Land questioned if we should go ahead with the construction plans so we agonised over the blueprint and looked at the numbers. 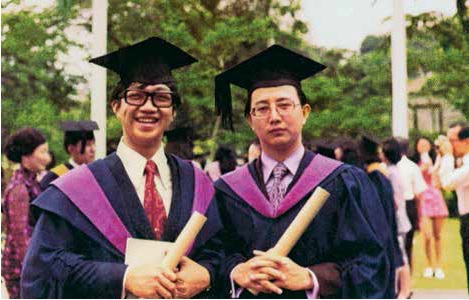 Raffles Medical Group's founders Dr Loo (left) with Dr Alfred Loh at their convocation at the National Theatre in 1973.
In the end, we decided to go ahead and build Raffles Hospital. In additon to Blanco Court, we submitted plans to acquire the old hawker centre nearby too, but it was not under the same proper ty, so we had to buy it from the Government. The high premium for that proper ty would have killed the project, but we eventually bought it over at a lower price.

The third setback we faced was that there were structural weaknesses in the building which surfaced during the final round of inspection, before construction works commenced. While these weaknesses were not fatal, we needed to reinforce the columns so that they can carry the weight of the hospital. This new requirement meant that our initial intention to just retrofit the original building was not going to be feasible anymore. If we started to strengthen the columns, they would be so big that there wouldn’t be enough space for corridors.

THC: What was the impetus that motivated you to go far beyond supporting your family and towards building such a successful medical enterprise?

LCY: The travels that I took broadened my horizons. Around that time, my father was progressing in his career too so we were financially comfortable by then. As such, being a doctor was no longer a duty for me. While I was serving National Service (NS) for two- and-a-half years, my good friend and classmate Alfred Loh was already a paediatric trainee who was considering going into private practice.

As I had already decided that I would go into private practice after I completed NS, I told him, “Why don’t we start a private practice together?” I was determined to start my own practice so as to start practice properly and not learn bad habits from other practices.

Part 2: RAFFLES MEDICAL: Dr CY Loo on maintaining the edge, and other matters

We have 1158 guests and no members online