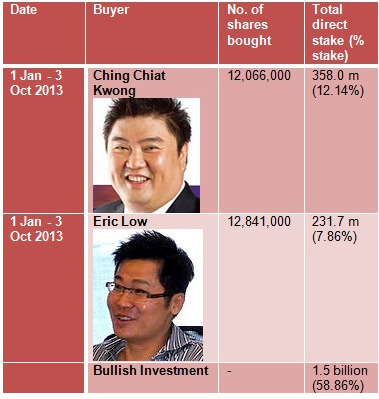 OXLEY HOLDINGS' share price has held steady during the recent rocky times in the stock market in no small part to the buying by its chairman-cum-CEO Ching Chiat Kwong and non-executive director, Eric Low.

As the table shows, each of them has bought over 12 million shares of the property developer since the start of the year, adding to the already hefty stakes that they own.

Ching and Eric jointly own Bullish Investment, an investment vehicle which controls 59% of Oxley which currently has a market cap of $1.1 billion.

Oxley is among a rare group of companies that have achieved billion-dollar status in a very few years from their founding.

Recently trading at 36 cents, Oxley's stock is up 57% since the start of this year.

Fundamentally, Oxley has had a strong earnings report for the year ended June 2013 with S$458m in revenue and S$104m in net profit.

Voyage Research, which is the only house covering Oxley, has projected that FY14 will see a big jump in its revenue and net profit to $1.156 billion and $238 million, respectively.


It based its forecasts on the launched projects and take-up rates yielding S$3.9bn of recognizable revenue and S$1.3bn of recognizable gross profit.
Notably, though, Oxley has high borrowings of S$1.57 billion versus about S$437m in cash equivalents as of June 2013. 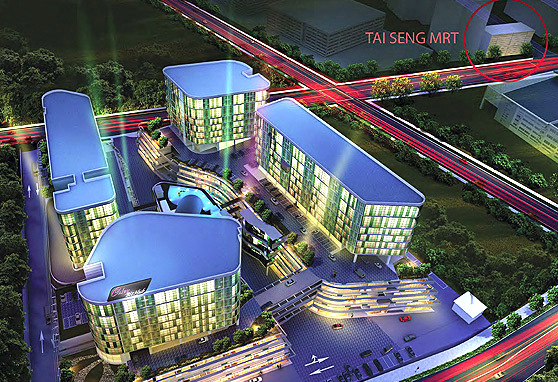 Oxley Bizhub is sited near Tai Seng MRT and MacPherson MRT. By end 2013, it will achieve TOP and contribute S$600+m in revenue and S$300m in gross profit, according to Voyage Research. Oxley Bizhub is a lifestyle industrial development comprising three podium blocks and four tower blocks, housing 728 factory and warehouse units.


Recent story: ASL Marine turns bullish on vessel market, OXLEY has $3.8 b revenue in the bag

At Global Premium Hotels, its non-executive chairman, Koh Wee Meng, has steadfastly accumulated the stock from the word 'go'.

Since its IPO in April 2012, the low-profile billionaire - whose picture is rarely seen in the media -- has bought 58 million shares, or a stake of 5.51%.

As the controlling shareholder of Fragrance Group, he has a deemed interest in 550 million shares of Global Premium Hotels owned by Fragrance.

It didn't declare an interim dividend and the final dividend payout is uncertain. The interim and final dividends it paid out in FY2012 arose from its stated intent at the launch of the IPO and were applicable specifically to that year only.

We have 720 guests and no members online