ASL Marine turns bullish on vessel market, OXLEY has $3.8 b revenue in the bag 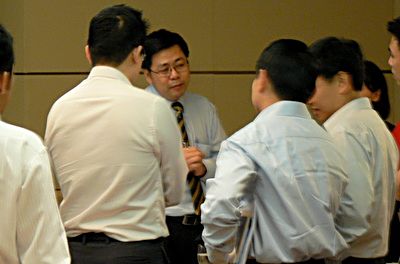 MD Ang Kok Tian at an analysts' briefing. NextInsight file photoASL is getting more aggressive by embarking on four build-to-stock AHTS in its Batam and Chinese yards, in view of the bottomed-out vessel prices. This can be a game changer for its shipbuilding business. Vessel sales and strong orders can catalyse the stock.

FY13 core profit was 10% below our forecast and consensus due to the higher tax rate of 18% (pre-tax loss from its subsidiary, Vosta). On a normalised tax rate (10%), the core profit would have met expectations. ASL declared a dividend of S$0.02. We cut our EPS by 4-8% for FY14-16 due to the higher taxes. We maintain our Outperform rating and target price (86 cents, still based on 0.9x CY13 P/BV, its five-year mean).

Positive outlook
ASL’s yards are operating at close to full capacity. Its order book stood at S$370m, with S$250m expected to be recognised in FY14. The enquiries for OSVs and hybrid terminal tugs (higher-value vessels) are strong. Although the financing terms are competitive at its Chinese yards, ASL is likely to stick to its current payment terms of 20/80 with some at 10/90. The ship repair pipeline should also see some high-value projects, especially for the FSOs from Indonesia.

Lifting margins
It will start with four generic-designed AHTS vessels (6,000BHP and 8,000BHP) and one maintenance work vessel. These vessels will cost S$85m in total and will be financed through ASL’s S$170m bonds. The construction will begin in 1QCY14 and is expected to be completed by 1QCY15. A successful sale of these vessels can fetch net margins of 30%. Its shipbuilding gross margins on the order book model yields an average gross margin of 12.5%. However, its net gearing shot up to 0.95x from 0.53x in FY12 due to the higher debt secured in view of this programme.

Voyage Research says Oxley Holdings has $3.9 billion of revenue yet to be recognised

The key difference was mainly due to the recognition of Oxley Bizhub 2 and Arcsphere in 4Q FY13 which boosted revenue by S$200m and S$20m respectively vs our estimate of 1Q FY14 completion.

Over the next few months, we expect Oxley Bizhub to be completed and add more than S$600m to revenue and S$300m to gross profit.

Oxley has acquired stakes in 10 overseas sites over the last four months, suggesting its intention of venturing for greener pastures in nearby regions. We believe Oxley is capable of delivering what the individual markets need, given their track record in Singapore.

Maintain Increase Exposure with an intrinsic value of S$0.470. 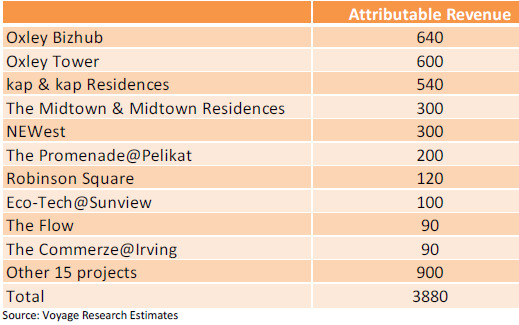 0 #2 lotustpsll 2013-08-31 09:55
Hi CC,
Your points are well made. In the oil and gas space, I have picked Jaya Holdings to be in my portfolio. Nothing like having a company that has its strategies well mapped out and at the same time managing its finances prudently. The icing is in its dividend yield > 6% and with current payout of 53%, this may likely be sustainable in the medium term.
Quote
0 #1 CC Low 2013-08-30 10:07
Build to stock strategy a game changer? It is nothing new. Jaya Holdings did that in the pre-financial crisis years. While putting cash into assets (ready vessels) awaiting for walk in customers may save time and money because there will be no lead time between orders and delivery and faster for registering sale into its P & L, it is only a strategy for shipbuilders who are strong in cash position with minimum or no external debts. It is a fairly dangerous game to play, financially speaking. ASL Marine is so heavily geared with a high debt ratio and employing such a strategy could inevitably strain its liquidity. At the moment, it remains one of the most heavily geared listed shipbuilders.

On the other hand, Jaya Holdings have changed their strategy to one which recognises regular recurring income and has a healthy outstanding charter contract value of US $280m to be recognised in the next 3 - 4 years. Unlike ASL Marine it has zero gearing now, with net cash surplus of US $60m, and is not only financially stronger of the two but also has better potential in terms of generating recurring income as well as in meeting the increasing demand of clients who need more technically superior and custom built vessels to support deep sea oil drilling requirements. I think ASL Marine should move into the higher end specification vessels (like what Jaya Holdings is doing) which would be a better strategy than building to stock. Just my 2 cents worth.
Quote
Refresh comments list
NextInsight.net

We have 1076 guests and no members online