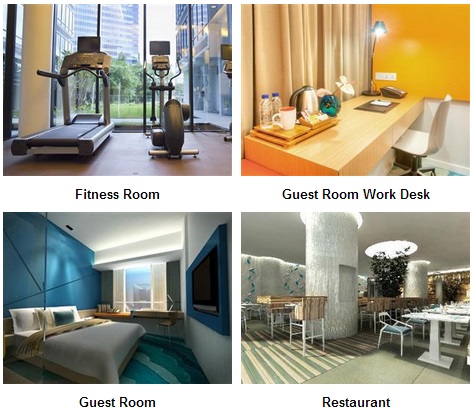 SOMETHING new is taking shape in the history of Hiap Hoe Limited and sister company Superbowl Holdings.

Their first-ever hotel - Days Hotel at Zhongshan Park - opened a few weeks ago on Balestier Road and their second one - Ramada Hotel, just a stone's throw away - is due to open in a few weeks' time.

These two hotels were developed by a joint venture of the two companies after it successfully tendered for land at a bargain price during the depths of the 2008 global financial crisis.

The impending opening of these hotels has given some buzz to the stocks of the two listed property developers in the past year (see charts), aided by Singapore's strong tourism numbers.

The stocks continue to hold their own because they are currently still trading at more than 50% discount to their RNAVs, going by estimates provided by investors such as 'Sumer' in the Hiap Hoe thread in our NextInsight forum.  as well as the 2nd Liner Prop stocks thread. 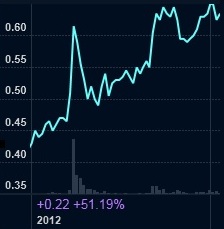 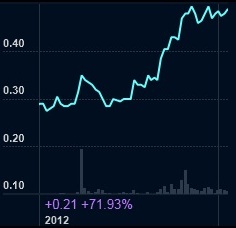 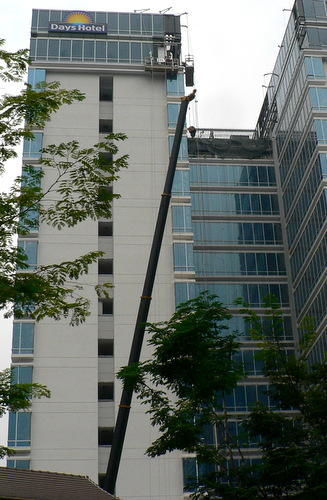 These two hotels are located in the midst of a food haven and, with wife and daughter in tow, I decided to check out Days Hotel last night.

I thought we might also be able to get our dinner there.

But no. After emerging from the hotel's basement carpark, we found only one restaurant open in Days Hotel.

Located on the ground floor, it was a fairly large one, and my eyes went wide in disbelief at the prices on the menu of the mostly Mediterranean fare -- Smoked Eel Crostini, Jumbo Prawn Paella, Marseilles Seafood Soup...

This for a 3-star hotel catering to budget travellers? I wasn't sure if this was the right fit and was not amazed that the restaurant (named "21 on Rajah") was mostly empty.

How to compete with the many popular eateries in Balestier that serve local dishes at wallet-friendly prices?

Perhaps the hotel was counting on its guests not seeking out Balestier's famed fare such as bak kut teh, chicken rice and steamboat?

Still, it was good to see some people traffic for a newly-opened hotel: Half a dozen guests were crowded around the hotel reception desk, probably checking in (or checking out).

Over the next couple of minutes as we walked along Balestier Road, keeping a keen eye for a food joint, I noticed a number of budget hotels -- there  were Fragrance Hotel, Balestier Hotel, Hotel 81 and Value Hotel.

These are far smaller and less impressive than the 405-room Days Hotel. Their room rates are around US$80 according to my check on Agoda while Days Hotel rooms are going for just above US$100.

There are 19 guest reviews (on the rooms, food, service, etc) already on Agoda with an overall satisfaction rating of 8.2 out of 10.

Before long, we settled in at a Chinese restaurant where we ordered a delicious meal of asam fish head ($24) -- my, the fish turned out to be very fresh and bigger than expected -- and kangkong cooked with belacan and cuttlefish ($10). The drinks of barley and lime juice were pretty satisfactory too. 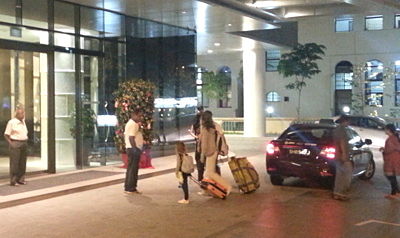 Then it was to nearby Rochor Beancurd for a refreshing bowl of its famous beancurd at $1.20 each.

Returning to Days Hotel to retrieve my car, I noticed a hive of activity at the entrance.

Some guests were arriving in a taxi and there were others at the reception desk.

If you are optimistic, you will expect revenue generation from this hotel (and the 4-star Ramada Hotel) to grow strongly -- but be mindful that there are start-up costs that will eat into the initially meagre profits.

0 #5 Sumer 2013-01-29 10:36
There are many units of eating places and perhaps bars just outside the 2 hotels, facing the park. I think al fresco dining could be expected as well. These are not opened yet, but they will be housed in the mainly glass structures with Chinese-inspire d roofs. Perhaps once all these open, the eating places will become a popular hangout enclave?
Quote
0 #4 Mickey 2013-01-29 04:18
U are absolutely spot on CC Low regarding hotel business. The extent of the return on capital lies in the purchase and development costs. In this regard, Hiap Hoe + Superbowl are in good shape as the bought the land dirt cheap (as the above article says). Now, it's up to their marketing people to bring in the tourists to complete the equation and bring about a fantastic outcome.
Quote
0 #3 CC Low 2013-01-28 22:33
Hotel Operations

I wouldn't go head over heels over some start up hotel operator no matter how rosy the picture may be painted of the expectant tourist arrival figures or projections. The hotel industry is a heavy cash flow business operation and thin margin, the spread of which would depend on occupation rate. Just to break even most hotels have need at least 70 % occupancy, and it is only when they hit rates above 90 % do the real margin kick in. During the down time years, e.g. the SAR and other lull periods, some hotels even close a quarter of their rooms to save costs. Not many big wig companies would like to go into the hotel owning business because of this. Other than the glamour associated with it, the returns on capital can be quite mediocre (which is one of the reasons why they keep on changing hotel chain operators to manage their hotels). Valuation (on per room basis) is no indicator of profitability or rate of returns on capital. It is based in tandem with moving prices in the property market.

Just some food for thought.
Quote
0 #2 Value Investor 2013-01-28 11:05
Dear Martin, It's fine. The hotel is managed by an international chain.
You can read about it in the Hiap Hoe press release: http://info.sgx.com/webcoranncatth.nsf/VwAttachments/Att_4D723F80FE24916148257AD2002BECA6/$file/Singapores_first_Ramada_and_Days_Hotel_brands_to_debut_in_Q1_of_2013.pdf?openelement
Quote
0 #1 LeeMartin 2013-01-28 09:16
Is "Days Hotel" a collaboration with "Days Inn", the logo looks very similar. Hope the Company don't face law suits from Days Inn.
Quote
Refresh comments list
NextInsight.net

We have 373 guests and no members online