Click on the above 54-second video for the where and who of Serial System's results briefing last Friday.

This was because of a drop in 'other operating income' and a rise in adminstration and distribution expenses.

Mainly the drop in 'other operating income' was due to the absence of dividend income from a Korean subsidiary. 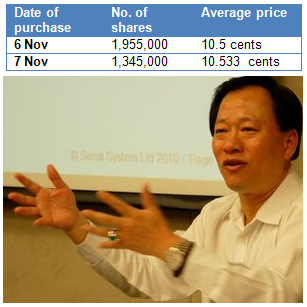 Derek Goh has been a regular buyer of his company's shares. NextInsight file photo

After the release of the results, Serial's executive chairman and CEO, Derek Goh, bought Serial shares from the open market (see table).

Serial has two key business segments, of which the electronic components distribution business registered a net profit of S$2.3 million as compared to S$2.1 million in 3Q2011.

Serial's other businesses posted a loss of S$0.01 million in 3Q2012 as compared to a profit of S$0.2 million in 3Q2011. That's mainly attributable to lower profit earned by wholly-owned subsidiary, Contract Sterilization Services Pte Ltd.

In terms of revenue, North Asia (comprising Greater China, South Korea and Taiwan) increased by about 17% year-on-year mainly due to newer product lines and additions from new customers.

Turnover in South East Asia and India jumped 25% mainly due to a new product line acquired in May 2011, through the acquisition of Intraco Technology. This new product line added S$14.8 million revenue for 3Q2012 as compared to S$6.4 million for 3Q2011.

Now for some forward-looking scenarios:

These 2 scenarios translate into a PE of 9-10X for Serial stock which recently traded at 10.4 cents.

As for the prospective dividend, based on recent years' payout, the final dividend for FY12 may be estimated to be 0.3 cents a share.

Add in the 0.22 cent interim dividend already paid, the total yield would be around 5%.

And now, back to 3Q2012 and some of the financial highlights:

> Serial's gross profit margin decreased from 9.6% in 3Q2011 to 9.1% in 3Q2012 as the electronics distribution markets which Serial operates in continued to experience price pressures.

> Cash conversion cycle is up from 70 days in FY11 to 72 days in 3Q12, owing to longer credit terms for Taiwanese customers (who are used to such generous terms in their market).

Revenue from Taiwan has shot up 24% to USD36.2 million in the first 9 months of this year. It's a relatively new market for Serial. 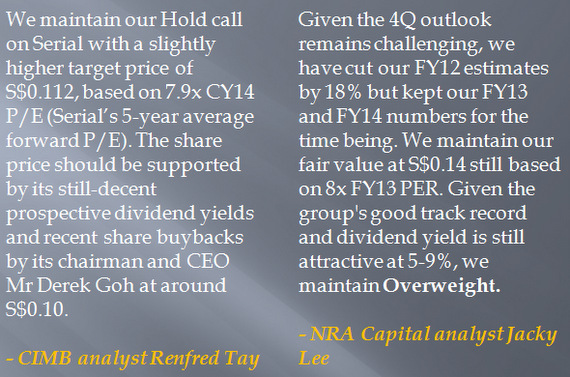 For the Powerpoint materials from the briefing, click here.

We have 681 guests and no members online