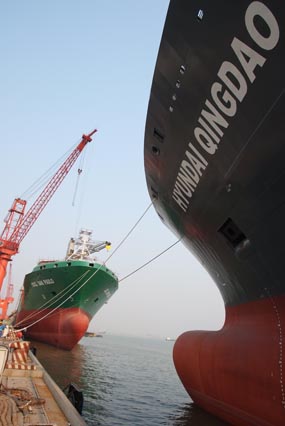 One of China's leading shipbuilders, Yangzijiang's income from active management of its financial assets during the first 3 quarters in 2011 was close to 10% of shipbuilding revenues.

SHIPBUILDER YANGZIJIANG'S microfinancing business has so far achieved a return of 10% to 15% a year, but analysts doubt that sizzling rate can be sustained in the long term.

Perhaps they may not fully appreciate how money lending by non-traditional institutions is thriving in China.

There is a dark underside to this vibrant industry with the emergence of loan sharks who prey on small businesses which are unable to borrow money through the usual channels under China's tightening monetary policy.

Underground money lending has become so big in China that Zhejiang is now known by PRC netizens as a major hub for loan sharks, while Wenzhou is plagued with the highest incidence of business owners on the run (from the sharks).

The increasingly exorbitant interest rates commanded in China’s usury business and its prevalence have reached unprecedented levels, according to PRC blogger Gu Wangyan, whose blog post on Sina provides insight to the situation.

NextInsight has rewritten in English Mr Gu’s analysis, as follows:

To boost its economy during the global financial crisis that struck in 2008, Chinese banks lent an astronomical sum (Rmb 7.37 trillion).  In 2009, the flood of money resulted in runaway inflation, and China reacted abruptly by curbing bank loans.

Why China's SMEs use loan sharks

Disadvantaged by China's bank-based credit financial system, small-medium enterprises in China often find themselves left out in the cold when the government imposes credit-financing curbs.

The reason is because China's financial system is dominated by large banks, and these prefer to lend to large companies.

The result: Pent-up demand from the SMEs for anyone with money to lend.

Chinese companies have been grappling the double-whammy escalating costs of running a business coupled with curbs on credit financing.

Unlike during the global financial crisis, however, they are now armed with ample orders.  Spurred by the prospect of obtaining working capital to fill these orders, many see loan sharks as the way out, regardless of interest rates.

The situation is not helped by the fact there is an incredible amount of money in the hands of cash rich parties in China.  Lured by the high loan yields, many individuals see underground moneylending as a way of making a quick buck.

As a large portion of underground moneylending activity takes the form of bridging loans, some actually take up bank loans to play the game.  All they need to do is keep close tabs on how their bank installment schedules match their debtors’ payment.

The way things are, as much as Rmb 3 trillion in loans given out by banks eventually find their way to the underground money market, according to Liu Mingkang, who chairs China’s Banking Regulatory Commission.

Those handing out high-yield loans do not only merely comprise of cash-rich individuals, but also include a complex network of financial institutions.

These range from bona fide insurers or micro-financiers to underground financial syndicates.

One wonders how is it that the micro-financiers licensed to assist SMEs have chosen to give high-yield loans instead of normal commercial loans. It appears that the funds have put speculative ends over and above their fiduciary duties to society.

The greater problem with the rise of usury in China is that unlike its real estate bubble, which can be controlled by central government policy in a homogenous manner across regions, the underground loan supply chain is a relatively isolated personal network.

Smashing one loan shark ring only kills the competition for other loan sharks.  What this means is the loan shark financing bubble will only burst when SMEs ultimately lose ability to maintain the exorbitant interest installments.

Unlike the real estate bubble, which grows in tandem with expansionary monetary policy (and vice versa), the loan shark financing bubble grows when the government curbs money supply.

So, regardless of what its monetary policy is, China’s economic bubble doesn't appear to be popping anytime soon.

nextinsight.net if there are PRC blog postings or analyses that you believe should be translated for Singaporeans.
Quote
0 #1 Shenzhen Singaporean 670911 2011-12-30 12:35
Many Singaporeans never leave their homeland other than holidays. So they don't understand the culture of other countries.

I believe they never hear about 小儿贷款 until Yangzijiang mentioned it. And they got the shock of their lives.

小儿贷款 is so common in China. I am earning 18.6% pa on my loan to a few businesses in Shenzhen. These owners use properties as collateral and are very safe.

Singaporeans know nothing in China. That is why most of the businesses in China are controlled by China men, Hong Kone men and Taiwan men. Singapore men are killed everytime they come here.
Quote
Refresh comments list
NextInsight.net

We have 1329 guests and one member online