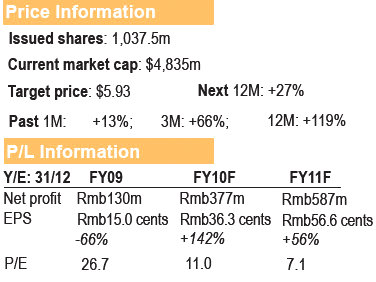 We are initiating coverage of Qinfa, China’s largest private-owned integrated coal service provider with a supply chain that encompasses mining, purchasing, processing and transportation, thanks to its self-owned coalmines and vessels, and owned or leased loading ports.

Benefiting from rising coal prices and a sharp increase of coal trading volume in the first half of the year, the company reported a 124% y-o-y increase in revenue to 2.79 bln yuan and a steep increase in net profit to 206 mln for 1H10, from a low base of 11 mln for 1H09. We are projecting a 40% net profit CAGR from FY10-12 with the drivers coming from an expanded coalmining capacity and increased coal trading volume.

After the acquisition of a 32% stake in Huameiao Energy, a coalmine consolidator in Shanxi, for 1.6 bln yuan last month and combining with its existing Ruifeng coalmine, Qinfa has direct access to a total coal resource of 150 mln tonnes with an attributable production capacity of more than 3.5 mln tonnes a year, equivalent to 50% of its coal trading volume in FY09.

"There has been a revival in demand for thermal coal for electricity generation," says Qinfa Chairman Xu Jihua

Huameiao’s Xingtao mine began production early this year with an output of three mln tonnes in the first ten months, while its two other mines, Fengxi and Congsheng, will start production within 1H11 with a total annual production capacity of eight mln tonnes.

The existence of a bottleneck in coal transportation on the mainland in recent years has helped underpin the coal price. Qinfa’s coal trading business is expected to sustain a stable gross margin of around 13%, or about 84 yuan/tonne in FY11, compared to an average of 12% for the past two years. Its value-added services include storage, blending, purchasing and transportation.

Qinfa currently operates four loading ports along the Daqin Railway, two owned in Shanxi and two leased in Inner Mongolia, with a total annual capacity of 10 mln tonnes. Qinfa plans to build another loading port near the Huameiao mines, which will further enhance its trading capacity.

Qinfa’s integrated coal supply-chain business allows it to benefit from the coal demand growth in China. Its upstream coalmining business will be the fastest growing area in FY11, which is expected to contribute more than half of total profit and supports 20% of its trading volume.

Qinfa’s capex in the past two financial years amounted to a total of 654 mln yuan and is projected to reach a sum of 2.48 bln yuan in FY10-11. The heavy investment has put Qinfa in a gearing position of 13% with 2010 net debt of 240 mln yuan. However, the company’s favorable development into a vertically integrated operator should deserve a re-rating for the stock with its more creditable earnings prospects.

We consider Qinfa’s acquisition of Huameiao Energy a fundamental shift in the company’s strategy, one that improves Qinfa’s chances of acquiring upstream coal resources. Its valuable distribution network and improved coal self-sufficiency should drive a further re-rating of the stock. 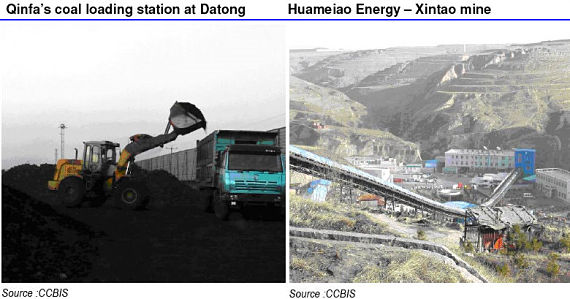 Potential consolidator: Huameiao is one of a handful of coal miners tapped by local authorities to consolidate the coal mines in Shanxi, making it easier for Qinfa to acquire more coal resources in that province. We estimate Qinfa’s coal self-sufficiency at anywhere from 50 to 60%.

Re-rating underway: As Qinfa evolves into a trading AND mining company, it should command the higher PE multiples typically enjoyed by the miners. Our SOTP-based target price of 6.20 hkd, pointing to 9.6x 2011F PE, is comfortably in line with 12.8x for commodity traders and 12.4x for Hong Kong-listed coal miners.

We have 1614 guests and no members online