"There has been a revival in demand for thermal coal for electricity generation," says Qinfa Chairman Xu Jihua (left). Photos: Company

And with prices for the highly sought after commodity in China on the rise, Qinfa’s Chairman is very bullish on full-year performance.

“Due to the revival in the demand for coal-fired electricity and the recovery of the global economy from financial crisis since the end of third quarter in 2009, the Group achieved a significant growth in trading volume of coal in the first three quarters as compared to the same period in 2009, said Qinfa Chairman Xu Jihua.

In the January-September period, Qinfa’s total coal handling and trading volume was approximately 7,753,000 tonnes, representing an increase of approximately 5,046,000 tonnes or 186% as compared to the same period in 2009.

And not only was Qinfa moving more coal, but prices were also higher which will surely help the company’s full-year performance.

The average selling price for coal during the first three quarters was 572 yuan per tonne.

This is 17% higher than the 488 yuan per tonne average a year earlier.

“We wish to provide a business update with the objective of enabling the our shareholders and potential investors to appraise the development in respect of our coal business,” Mr. Xu added.

“With business operations strategically located in Hong Kong and various cities in China, namely, Datong, Yangyuan, Qinhuangdao, Zhuhai and Guangzhou, we are able to source coal in China and overseas markets. We have also diligently achieved long-lasting and fruitful business relationships with our solid clientele of large-scale coal consuming enterprises in the coastal regions of China,” says he said. 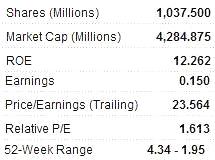 “In China, Qinfa sources coal mainly from the western and northern regions, and provides full logistics services and transportation arrangements through ground and sea transportation to deliver the coal to customers in the coastal regions of China. Qinfa has its own fleet and chartered vessels, which facilitate the shipping transportation of coal.

“Apart from coal transportation, our vessels are also engaged in the provision of dry bulk cargo transportation services to other customers,” Mr. Xu said.

Qinfa was bullish on China’s economy and its growing hunger for coal, as the vast bulk of the country’s power generation plants are coal-fired.

“The global economy has gradually recovered from the financial crisis. There has been a revival in the market demand for thermal coal for electricity generation. The monthly average selling prices of coal during the six months were in the range between 538-602 yuan per tonne, which were significantly higher than the range of 400-489 per tonne during the same period in 2009," he said.

This was primarily the reason for Qinfa’s spectacular first half results, in which net profit shot up 1,791% year-on-year to over 206 mln yuan.

With recent performances like this, and coal prices and trading volumes continuing apace, NextInsight will be keeping a close eye on Qinfa’s full-year performance.

We have 2178 guests and no members online