MAN WAH: Surprise! Sales of sofa to US are booming! 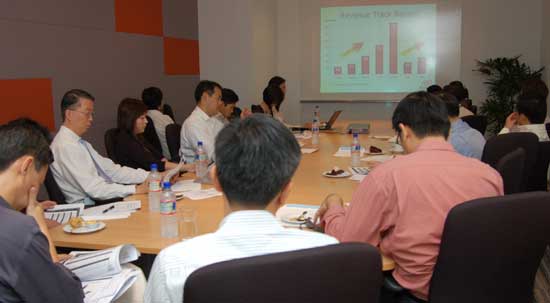 THE US housing market may be battered but Man Wah Holdings, a China-based sofa maker, has just reported a 104.6% leap in sales to North America for the Mar-June period, its Q1 for FY 09.

The HK$261.7 million sales to North America was due to higher sales orders from major furniture retailers.

The demand from them is overwhelming compared to Man Wah’s existing production capacity.

At a briefing on Friday afternoon (aug 8), Man Wah CFO Francis Lee cited as an example a customer as having more than 150 stores and selling 202,000 sofa sets a year.

In comparison, Man Wah’s production capacity is 500,000 sofa sets a year in FY08 and the current financial year. This is a sharp increase from the 153,000-set capacity in FY07.

Man Wah's latest Q1 sales boom to the US continues a trend that the company - which is listed on the Singapore Exchange - has achieved: Between FY05 and FY08, US sales CAGR was 77.8% (see chart on the right).

Not only was its US sales booming but also its domestic market, China, where its sales rose 47.8% to HK$74.5 million in Q1.

Its annualized Return on Equity was 37.1%, the highest in the past three financial years.

Man Wah is the largest by market capitalisation and is the fastest growing (by sales and profit) among furniture companies listed on SGX, as the tables at the bottom show.

"We remain cautiously optimistic on Man Wah, in view of the protracted weakness in the US housing
market and the slowing China housing sector.

"With little visibility on the extended duration of US housing market problems, we have revised down our net profit estimate by 6.2% to HK$228.5m in FY09.

"While we have downgraded the earnings estimates due to concern on the longer than expected drag in US housing market, we still like Man Wah for its strong business execution to ride on the furniture outsourcing trend. Maintain BUY." 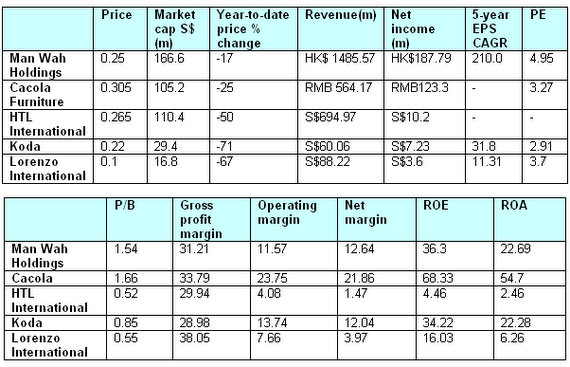 We have 431 guests and no members online