“Golden Harvest is in a strong growth industry with PRC government support. The cinema box office receipts for China grew 41% CAGR from Rmb 3.3 billion in 2007 to Rmb 13.1 billion in 2011,” VC said. 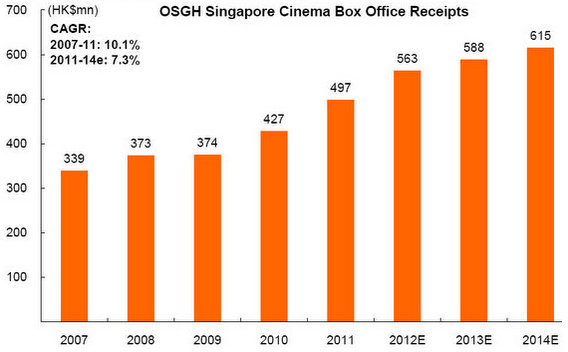 Golden Harvest cinemas are a common sight in Singapore

“We expect the strong growth to continue due to the increases in income levels, low penetration rates, aggressive expansion plans of the industry players and relaxation of the annual imported film quota from 20 to 34.” 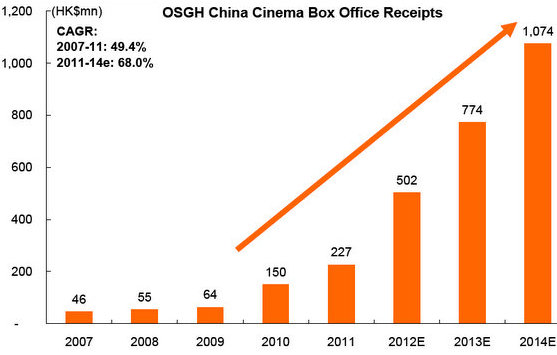 Orange Sky Golden Harvest has been expanding aggressively since 2009 in the PRC. 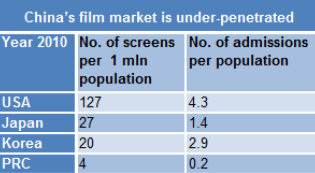 "Based on the expected number of new screens, we expect OSGH’s PRC box office receipts to grow at CAGR of 68% during 2011-14e,” VC said.

The research house said it believes OSGH offers investors an alternative investment channel to capitalize on the exponential growth of the China film market with a relatively low valuation when compared with its A-share peers.

“Assuming that its PRC expansion plan will materialize, we expect the percentage of China revenue will increase from 29% in 2011 to 56% in 2014e. 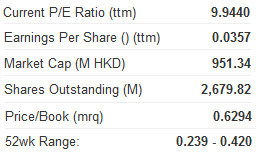 VC said that current fill rates of OSGH’s China cinemas are catching up as it takes time for the new cinemas to ramp up.

“As such, we believe OSGH will enter its key harvest period from 2014 onwards.

“This was supported by the strong growth of the number of cinemas, the number of films and the rising purchasing power of the population. The growth outperformed that of the overall economy and showed no signs of slowing down despite the global economic crisis from 2008-2009.”

Kingston Securities said that it is assigning a target price of 13.8 hkd to leading Chinese footwear play Belle International (HK: 1880).

“The changes in the macroeconomic environment had a negative impact on Belle. Same store sales (SSS) growth experienced a notable growth slowdown in H2 2011,” Kingston said.

The research house added that following the 8.2% SSS growth in footwear business in Q4 2011, the Group’s SSS growth reported a further decrease to 2.8% in Q1 2012, while the sportswear business had a SSS decline of 2.4%.

“The excess inventory level has led to frequent promotions, hurting the overall GPM and profitability in the industry. Yet, the Group possessed a strong bargaining power coupled with relatively low concessionaire rates. 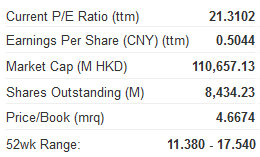 “Because of the significant differences in business models and profitability between the segments, footwear segment sales grew at a faster rate than sportswear.”

Kingston added that the acquisition of Big Step Ltd creates synergies with the Group’s other businesses, and will enhance overall profitability.

“It was estimated that the acquisition will bring about RMB 2 billion revenue to the Group. Other than that, the Group started to engage in the mid-low end women’s footwear by the brand of 15MINS, but the business scale is still small when compared with Daphne International. (HK: 210).

Bocom International said it is maintaining its “Outperform” rating on Hong Kong-listed lenders.

“Beijing recently unveiled a series of policies to strengthen the cooperation between Mainland China and Hong Kong, hoping to support the city’s economic development. In terms of financial support, the central government will encourage foreign investors to use RMB to conduct trade settlements and investment in Hong Kong, improving the variety of offshore RMB-based services in the city. 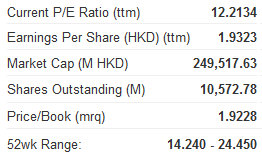 "In addition, it will also facilitate the long-term investments from Hong Kong in the mainland's capital market,” the brokerage said.

“Meanwhile, Hong Kong financial institutions will be allowed to set up consumer finance companies in Guangdong Province. The central government will push forward joint ventures for stock exchanges in Hong Kong, Shenzhen and Shanghai, as well as issue bourse-traded funds listed on both the Hong Kong and mainland stock markets.”

“While the latest policies are favorable to BOCHK and HKEx and could bring about some short-term trading opportunities, the impact would largely rely on how the Government implements these policies.

“Since the current valuations have priced in the growth of RMB businesses, share prices of BOCHK and HSBC will be boosted only if the new measures could lead to stronger-than-expected growth.”

We have 504 guests and no members online