Getting to know Emma Cheung, the new Exec Director of SAPPHIRE 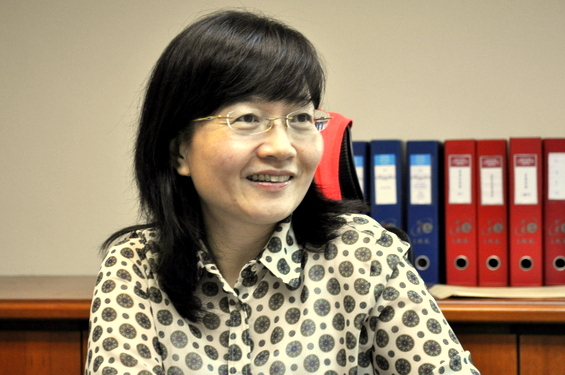 AS SAPPHIRE CORPORATION makes big moves to expand its steel business, it has installed a new executive director - a lady who grew up in the coal-rich province of Shaanxi in China, and last worked at the top rung of one of China's major steel groups.

Emma Cheung, who previously was based in Shenzhen, relocated to Singapore in January this year to become Sapphire's chief operating officer. She was appointed executive director as well last month (Nov 2012).

She was recommended by her previous boss at Sichuan Chuanwei Group (also known as Sichuan TranVic), a conglomerate founded in 1929 and has businesses in steel and cement production, coal and iron ore mining, and real estate.

Her ex-boss is Mr Wang Jin, 49, the Chairman and President of the privately-held Sichuan Chuanwei, and a major shareholder of Sapphire.

His recommendation of Emma came about because she could relate to the business as well as appreciate the deepening relationship between Chuanwei and Sapphire.

The foundation for the relationship was solidified back in 2010 when Sapphire and Chuanwei signed a strategic cooperation memorandum witnessed by Singapore's Lim Swee Say, Minister in the Prime Minister's Office, and China's Liu Qibao, Provincial Secretary of Sichuan Province.

On the table now are two M&A proposals whereby Sapphire would acquire S$62 million worth of assets which are partially owned by Chuanwei and Mr Wang.

With Sapphire's increasingly China-centric focus, "Sapphire wanted a COO who could communicate with its China partners and its subsidiaries in China," explains Emma.

Outstanding student aspiring to be a diplomat but.....

Outside of work, Emma Cheung loves to read Chinese essays and go cycling with her daughter in East Coast Park. Photo by Sim Kih

Emma was outstanding in school and qualified to be among a rare cohort (2%) to enter university in China in the early 1980s.

Her choice of study at the prestigious Beijing University was International Politics, and she hoped to eventually excel as a diplomat.

Four years of studies and a bachelor's degree later, she went on to graduate school -- the Chinese Academy of Social Sciences --- and earned a Master’s Degree in law after three years

Fortuitously at that time, in the late 1980s, China was opening up to foreign investment and the private sector was beginning to thrive. It proved to be a strong draw and Emma ditched her diplomat's dream and joined a private firm.

Just a year later, she and a former classmate started a business in Hong Kong helping foreign companies to set up in China. "We had a lot of guts," she recalls with a laugh.

During the next 10 years, one of her clients was Caltex, which she helped set up 3 joint ventures in Tianjin. She also was a wholesaler of Caltex products such as lubricants which she distributed to Chinese coal mines, steel factories, and car manufacturers.

With eight staff, the business achieved annual revenues of as much as US$20 mlllion.

It was a demanding job and after her daughter was born in 1998, Emma sold her 50% stake in the business to her partner.

After a short period of rest, she joined a small-cap listed company as CEO, staying for 2 years before leaving for Sichuan Chuanwei (also known as Sichuan Transvic) in 2004.

"I was hired to set up a Beijing representative office and an office in Hong Kong. These were Chuanwei's first offices outside of its home province. As a graduate of Beijing University, I had a lot of connections in Beijing."

The Beijing office dealt with central government officials while in HK, Emma managed the transfer of certain assets of Chuanwei from China to Hong Kong, raised funds, and liaised with financial Institutions.

"I was a pioneer and it was a tough job going to Hong Kong and getting bankers to understand Chuanwei's business and to trust us and give us a loan. I was happy doing this because I think Chuanwei is a very good company."

What contributed to the success? In part, she said, it had to do with the 10 years that she had lived in Hong Kong prior to 1997, and picked up enough Cantonese to be able to converse with Hong Kong bankers (who didn't speak Mandarin).

Sapphire will continue to develop its steel business and step up its trading business, says Emma, who has a direct interest of 437,750 shares in the company.

Sapphire considers Singapore to be a good place to do trading of commodities with mineral resources producing-countries such as Australia, Brazil and India.

It is divesting its legacy business, which is largely construction-related.

Sapphire is headed for a busier, and hopefully more profitable, year in 2013, which will crimp the spare time and hobbies of Emma.

She says she now mainly reads in her past-time (Chinese essays on values and philosophy) and cycles with her 14-year-old daughter in East Coast Park. And she sings. And plays the pipa.

What she misses are mountains, as she loves hiking back in Sichuan.

We have 829 guests and no members online