Click on the above 38-second video for the where and who of our visit to Food Empire's HQ in Harrison Road in the MacPherson area.


THE THREE instant coffee companies listed on SGX are drinking to the good times.

This year, their net profits have gone up handsomely and gross profit margins expanded.

Investors have piled into these stocks, reaping capital gains that outperform the benchmark Straits Times Index by a mile. 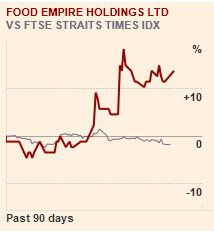 Food Empire has outperformed the market index in the past 90 days. Source: FT.com

These three companies, while broadly speaking are doing the same type of business, differ in several aspects of their business model, their target markets, etc

And the relative performance of their stock prices may be attributable to a host of factors.

Aside from raking in higher profits, Super has built up a sizeable analyst following as well as delivered relatively larger topline and bottomline figures that put them on the radar screen of fund managers.

Viz Branz has, in part, speculation of a takeover to thank for the run up in its stock price.

Food Empire's products do not enjoy high visibility among consumers and investors in Singapore because the company's key markets are Russia, Ukraine and Kazakhstan.

Food Empire's stock price, with the smallest percentage gain among its peers, also has the lowest PE ratio. Will this lead to relatively more upside? Only time can tell.

Food Empire said in its recent announcement that forex gain and a tax writeback did help boost its 3Q profit. And the rest?

CFO William Fong, in a meeting with NextInsight, explained that higher selling prices played a key role while lower raw material prices (coffee, creamer and sugar) did contribute to some extent too.

He said the selling prices of Food Empire's products were raised a few times since last December -- moves which were made possible by a dip in the USD vis-a-vis the local currencies of Russia, Ukraine and Kazakhstan. 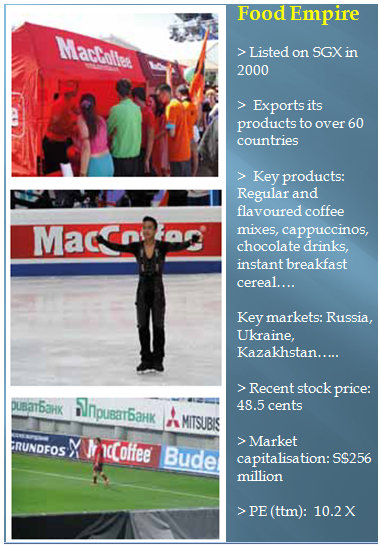 Summarising the 3Q performance, executive chairman Tan Wang Cheow said: "In these uncertain times, to be able to deliver such results, it's good. We are thankful for a lot of favourable factors, including the foreign currency situation."

He said Food Empire has just set up its own production plant in Ukraine (a key market which contributes 15% of Group sales), which will lead to improved profit margins.

In the longer term, Food Empire will also expect better profit margins arising from the setting up of its own plants to produce non-diary creamer (in Malaysia) and coffee powder (in India).

The coffee and creamer output will go into the making of Food Empire's own products while the rest will be sold to third parties. Result: Higher Group profit margin and higher revenue.

Capex for the two plants has yet to be disclosed but it is expected to be financed by bank borrowings of 60-70%.

Finally, given the capex and the higher earnings this year, how will the dividend payout turn out to be?

Executive chairman Mr Tan would only say: "In the past, if we didn't suffer any loss or experienced a sharp fall in profits, we have given out roughly a third of earnings as dividends."

We have 452 guests and no members online