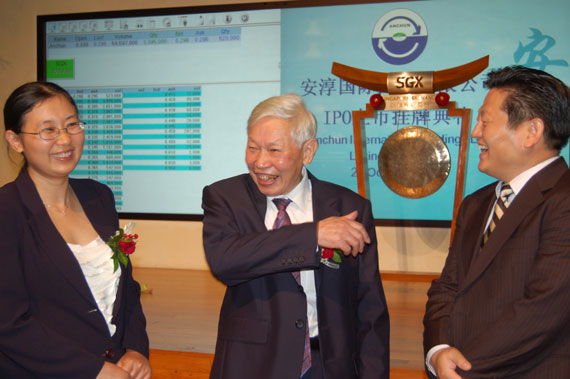 IT'S A HOT IPO! Anchun International debuted with its first trade done at 33 cents, 18% above its IPO issue price of 28 cents.

Most of the 130 million invitation shares for the IPO (98%) had been allocated to the placement tranche and not many people who subscribed via ATM were successful.

Monies received for the 2 million shares available for ATM application amounted to some S$275.7 million, or a subscription rate of 492 times for the public offer tranche.

Anchun is hot for several reasons.

Firstly, there is smart money betting on its investment story.

China XLX, a major customer and one of China’s largest coal-based urea fertilizer producer in China, is a pre-IPO investor with 19.6 million shares (3.88% of post-listing issued capital). 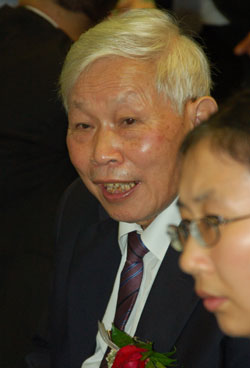 Anchun's founder Xie Ding Zhong has won prestigious awards for his contributions to the development of engineering technology in China. Photo by Pearl Lam.

The second thing about Anchun is its market leader position. It is a leading PRC integrated chemical systems engineering and technology solutions provider for manufacturers of ammonia and methanol-based products.

”The problem with using chemical fertilizers is the pollution it causes, but our technology enables farmers to save money and be environmentally friendly,” said executive chairman Xie Ding Zhong during a meeting with NextInsight at its IPO ceremony today.

Two-thirds of China’s 510 ammonia producers have purchased and used Anchun’s equipment and services, and the management believes it is the only PRC company with proprietary chemical systems and components, as well as catalysts.

More than 90% of ammonia produced in China is used to manufacture fertilizers and most of Anchun’s customers are from the petrochemical and chemical industries in the PRC, especially fertilizer producers.

These are large players, the likes of Sinofert, which is the HK-listed fertilizer production subsidiary of no.1 PRC petrochemical trader Sinochem.

Fertilizers increase crop production yields by 40% to 60%, and that is why Anchun's technology is so important to farmers.

Even a smaller customer, Sinofert, is also expected to grow 20%. The growth prospects will result in high utilization rates of their production facilities, resulting in the need to increase capex, said the analyst.

As the PRC government seeks to ensure its energy security, the use of dimethyl ether (a derivative from methanol) is expected increase as an alternative fuel. 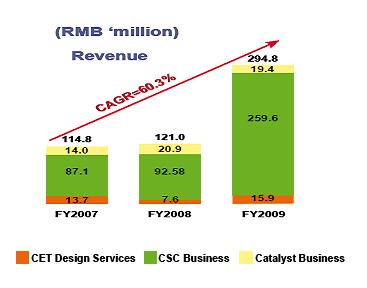 Gross profit margin held steady at over 40% over the last three financial years.

Order books are currently huge, at Rmb 256.4 million, of which Rmb 235.5million is expected to be delivered this year and Rmb 20.9 million next year.

Capacity utilization is now 60%, but the management expects this will be maxed out by mid-2012.

The remaining S$4.4 million will be added to the company’s S$25 million existing cash holdings for R&D and working capital.

Anchun’s main risk is price volatility (in particular steel) of materials used for manufacturing its chemical systems and components.

Secondly, the cessation of income tax incentives for high-tech companies (currently 15% compared to 25% for a period of three years) in Nov 2011 will hit net profit.

All told, NRA Capital is positive about the stock and says the fair value is 41 cents.

We have 378 guests and no members online