To see what Starburst will contribute to a big year for the group, investors can look back to its performance in 2021.

Then, to gauge the near-term prospects, they can consider the orderbook that Starburst carries, some key information of which was released courtesy of Nordic this week.

The first part: the look-back.

(A PE of 6 is way below the double-digit PE ratios that Nordic has historically traded at.)

Thus Starburst would have been a strongly accretive acquisition (with no additional shares issued by Nordic as consideration). For the impact on more metrics, see Nordic's presentation deck here.

What's important now is will this positive state of things continue this year and beyond? For an answer, consider Starburst's orderbook and the Nordic group's, the aggregate of which is shown below:

Q: Is there any foreseeable capex either of Starburst or Nordic that will change the group's 40% dividend payout ratio?

A: Starburst is basically an engineering group working on projects and maintenance. It doesn't need to invest in a lot of capex and machinery. What Starburst really needs is working capital, loans, to fund their projects.

So I don't think that will affect our dividend payouts. In fact, if anything, with the margins that we are enjoying we should derive quite good cash flow from their projects and maintenance.

Q: What is Starburst's potential pipeline of projects? At what stage is it in bidding for these jobs?

A: We have a rather robust pipeline but the gestation period for some of this in a way takes a bit longer. Given time we should be able to close out some of the deals. 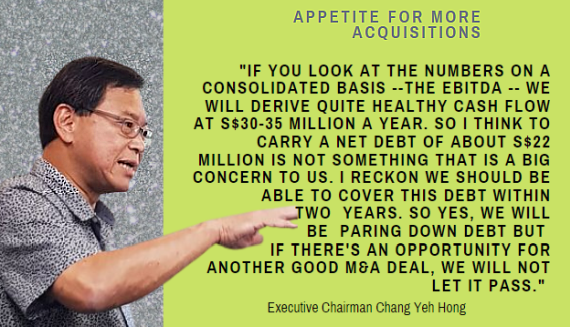 Q: After the Starburst deal, will your immediate focus be paring down debt ahead of more M&A?

A: If you look at the numbers on a consolidated basis --the EBITDA -- we will derive quite healthy cash flow at about S$30-35 million a year. So I think to carry a net debt of about S$22 million is not something that is a big concern to us. I reckon we should be able to cover this debt within two years. So yes, we will be paring down debt but if there's an opportunity for us for another good M&A deal, we will not let it pass.

Q: Regarding Nordic's new capital project in Malaysia with Intel at RM70 million to be completed in 18 months. What can we expect after that in terms of recurring revenues from maintenance for this new facility?

A: We do not have an idea right now because we are at the very start of this capital project. Usually for 12 months, we have to provide warranty and support so there probably won't be any maintenance income from that. After the 12-month warranty, the maintenance tender will come out.

We have 1212 guests and no members online