The price drop was attributed to weak demand resulting in an oversupply of aniline as several chemical factories in the downstream industry were shut down in May amid the tightening environmental policies. Aniline is a key raw material for Sunsine’s chemical products.

Lower raw material prices could boost 3Q18F gross margins
The price index for rubber accelerators in China have generally held steady in recent months at Rmb19,800-21,300 per ton over the Apr-Jun 18 period, based on Sublime China Information (SCI) data.

If ASPs for accelerators continue to remain steady over the next 1-2 months, we could possibly see better-than-expected gross margins in Sunsine. Raw material accounted for c.80% of Sunsine’s total costs in FY17.

If ASPs were to decline correspondingly instead…
We think this could still track our thesis on ASPs normalising in 2H18F and in line with our earnings forecasts.

Rubber accelerators producers could adjust ASPs accordingly with lower raw material costs in order to sustain cordial relations with international tyre makers and other key customers if tight supply of accelerator conditions are easing off.

Also, a beneficiary of rising US$ against renminbi
As at end-FY17, Sunsine had a net asset exposure of Rmb424m in US$, with about 70% held in cash. About one-third of its products are exported and international sales accounted for c.36% of its 1Q18 revenue at Rmb307m. 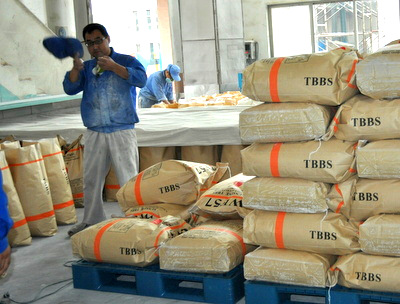 Rubber accelerators (TBBS) in China Sunsine warehouse. NextInsight file photo The recent strengthening of the US$ vs. Rmb could lead to substantial FX gains for Sunsine in the coming quarters.

Production volume for rubber tyres in China grew 7% yoy to 653m in 2017, according to data from China Rubber Industry Association as replacement tyres roughly account for c.70% of total tyres produced.

Sunsine’s chemical products are mostly sold to tyre makers for the manufacturing of rubber tyres. Sunsine captured a c.25% market share of domestic production of rubber accelerators in 2016.

We have 841 guests and one member online