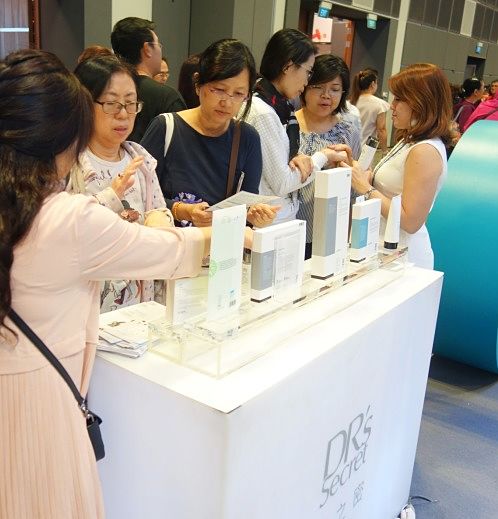 @ Expo Singapore: Visitors learn more about Best World's DR's Secret range of skincare products. Photo: CompanyWhat if we add in the dividends that Best World has delivered through the years? The total gain for Mr Long-Term Investor would be 24x.

Here are the numbers:Best World's IPO took place in July 2004 at 30 cents. The business didn't excite too many investors, and the stock price ended the year unchanged at 30 cents.Let's say you bought $10,000 worth of its shares then. That gave you 33,333 shares (rounded for simplicity).You held on tightly to them and today -- 14 years later -- the original bunch has become 125,000 shares through 3 bonus issues and one stock split.Through the years, the earnings of Best World trended up, interrupted mainly by the global financial crisis of 2007-2008.Now, those 125,000 shares are worth $230,000 (at $1.84 a share).Adding to the capital gain are dividends, derived from Best World's high cashflow business.The original bunch of 33,333 shares (which then multiplied through three bonus issues and a stock split) has attracted $14,352 in dividends.

With a 14-year track record as a listco behind it, Best World should not surprise anyone if it achieves unparalledl success in the biggest market yet -- China.

Best World is now at the start of a foray into the business of direct-selling its skincare products in China (under a new business segment "China Wholesale" which will effectively replace the "Export" segment).

The prospects are as bullish as they come. See: BEST WORLD: To extend direct-selling to at least 7 China provinces by 2018

In its first wave this year, it targets 9 cities in seven provinces with a combined population that is about 10X that of the 3 Taiwanese cities (Taipei, Taichung and Kaoshiung) where Best World has been enjoying sweet success in recent years.

We have 611 guests and no members online