Balance sheet: Thanks to its strong cashflow, in the first nine months of the year, Nordic paid off around $7mn bank borrowings out of the $20 million taken last year to help pay for the Austin Energy acquisition.

Asked if Nordic has collection challenges with clients in the marine, oil and gas industry, Mr Chang said the company had taken steps early to ensure full collection, and thus expects minimal impairment risks for its receivables.

Going forward, Nordic's outstanding order book has drastically reduced from $39.2mn as at end-2015 to $26mn as at end-Sept 2016 due to the slump in the marine, oil & gas industry.

Note that the order book does not include the value of maintenance contracts from scaffolding and insulation services as they are contracted at unit rates and do not have contract values upfront.

Reacting to the slump, Nordic plans to right-size its systems integration business while looking for expansion beyond marine to “general industries” and the petrochemical industry – using the same skill sets. Stay tuned for some progress reports, said Mr Chang optimistically.

Though the share price of Nordic has risen about 22% year-to-date, Mr Chang  confidently pointed out that it continues to be undervalued.

“We are very undervalued. The P/E today is 7-8 times, for a company growing every year at 20%. It should be in the mid-teens....It’s too bad we are in the oil & gas sector, we are pulled down by the rest.” 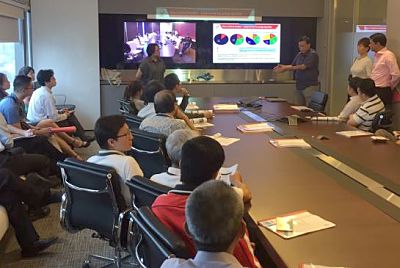 Chang Yeh Hong, executive chairman of Nordic Group, and Dorcas Teo, CEO of Nordic Flow Control, @ another 3Q16 briefing.
Photo by Colin LumMr Chang revealed that several funds in Singapore and from overseas had broached the idea of buying out Nordic but were declined.

Reflecting the undervaluation of the stock, Nordic and some of its directors have been buying back its shares since September 2014.

We have 951 guests and 2 members online