ROBERT STONE: What's "by far the best thing I've ever done if it's successful" 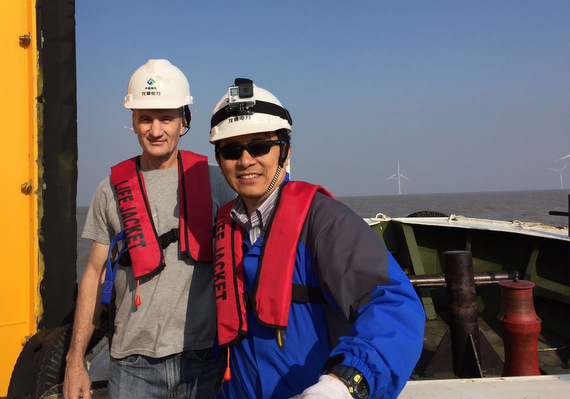 Robert Stone (left) with Henry Han on a work boat at an offshore wind farm.Sometime in 2013, Robert Stone mentioned to me his investment in a Singapore start-up called Hann Ocean which was developing a "wave energy converter".

In simple terms, the technology makes use of the energy of ocean waves to produce electricity.

That sounded like another high-risk, high-reward investment that some high networth investors might make. (For articles on Robert's stock investments, see the links at the bottom)

But Robert said: "I''m less interested in making money from this venture than I am in doing something that I think will benefit many people and the environment.

He cited an experimental project that the start-up was embarking on in the Maldives.

Fast forward to 2016 and I learn that Hann Ocean is now planning a pilot project on an offshore wind farm in China. 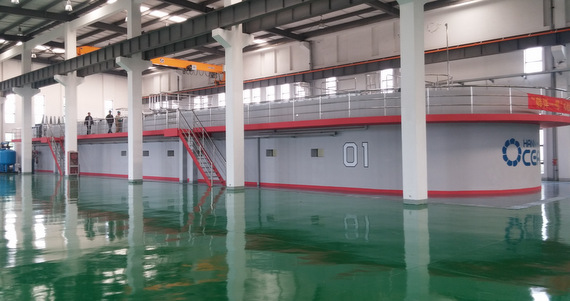 Hann Ocean's wave test tank in the Sutong Science Park near Shanghai. The 45m long tank is completed while the wave maker and a demonstrator model of the Drakoo Wave Energy Converter (WEC) are still being built. The tank will be able to generate 1m high 5-second period waves with a 30 metre wave length. This will demonstrate that the full scale model WEC actually works as well as allow further refinement of the technology via large scale testing.
"We are looking to integrate the wave turbine with offshore wind turbines," emailed Robert recently. "This should have mutual benefits for both technologies by lowering the marginal cost of both installations and the resultant electricity produced."

There's still much work to do -- and more money needed.

And Robert is staying the course.

"The potential of wave energy is huge. The energy density of water is about 800 times that of air so it should be a much better source of energy than wind. The problem is to date although there has been hundreds of different models and concepts tried over the years none have been economic.

"Having done a lot of research on the topic I think Henry's technology is the simplest with the highest efficiency."

Henry is Henry Han, the founder of Hann Ocean Group. He is a naval architect-turned-entrepreneur with an M.Sc in Smart Product Design from Nanyang Technological University in Singapore.

The Hann Ocean website says that "in his 11 years’ service in the Defence & Science Technology Agency Singapore, he has won more than 15 awards including Defence Technology Prize and Innovation Excellence Awards for his outstanding contributions in naval technology innovation and project management."

With Henry and his team driving the project hard, Robert said: "So far I have invested nearly S$5m of my own money over the last 3 1/2 years in Hann Ocean and am encouraged to continue to support the company further. The potential is so great that even though the success of the business is by no means guaranteed, I think it will be by far the best thing I've ever done if it is successful."

We have 2551 guests and no members online