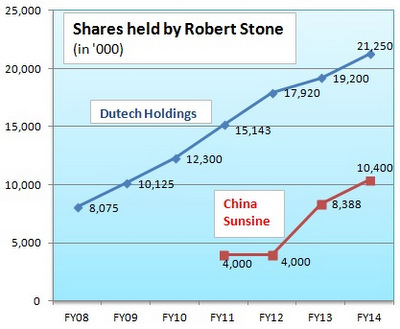 Figures are from lists of Top 20 shareholders in the annual reports of China Sunsine and Dutech Holdings.CHINA SUNSINE stock rose 100% last year and, instead of paring down his stake, Robert Stone increased it significantly.

It is the same story with Dutech Holdings whose share price rose 62%.

As our chart shows, Mr Stone, who is well-known in the investment community in Singapore and has lived here for more than 35 years, has consistently increased his stake in these two companies. And they are S-chips.

In particular, China Sunsine, which is the world's largest producer of rubber accelerators (chemicals used in the production of tyres), reported a 187% jump in net profit to RMB220.2 million in 2014. 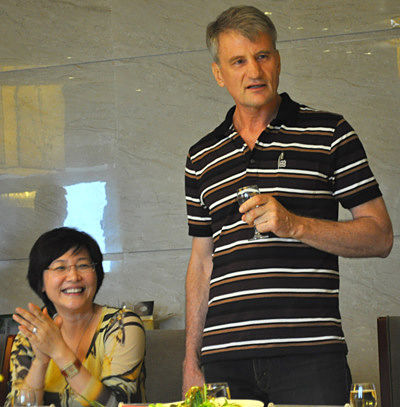 Robert Stone, 57, at an analyst-media-investors' visit to China Sunsine last year. NextInsight file photo.The company, which has paid consistently a 1-cent dividend a year, has now upped it to 1.5 cents for FY2014.

Dutech, which is a key supplier of ATM safes globally, reported a 44% rise in net profit to RMB144.8 million, inclusive of a one-off gain of RMB55.9 million from an acquisition.

His 5.96% stake in Dutech is worth more at S$6.16 million, making him the fourth largest shareholder of the company.

He holds significant stakes in other companies such as HK-listed Dawnrays Pharmaceutical and listed companies in various Asian markets.

We have 759 guests and no members online