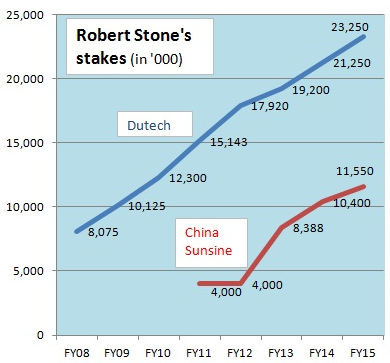 Robert Stone's shareholdings as stated in the annual reports of Dutech and China Sunsine.
Compiled by NextInsightAttracted by some fundamental reasons, many investors buy into a stock only to dump it months or perhaps a year or two later when the price action continues to be lethargic.

Robert Stone is different in this respect, going by his yearly accumulation of the shares of China Sunsine, which is not exactly a well-known S-chip.

He is also into Dutech Holdings, an S-chip with even less recognition power. See chart. 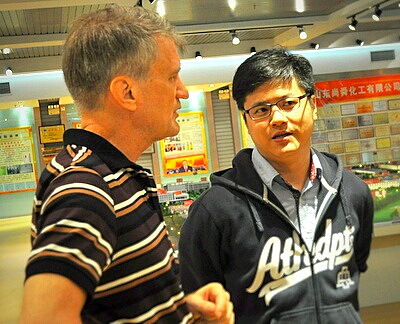 Robert Stone with Tong Yiping, the CFO of China Sunsine, during a visit by analysts and investors to the company. NextInsight file photo.In the top 20 shareholder list of the just-released 2015 annual report of China Sunsine, Robert owned 11,550,000 shares.

They are worth about S$3.92 million at the recent share price of 34 cents.

♦ Operating out of China, they are among the top global players in their industries, and continue to sharpen their competitive edge.

♦ Their customers are global names.

♦ They are profitable and have strong balance sheets.

♦ They are trading, and have been trading, at oh-so-cheap valuations. (So what does the market know? Or is it dumb?)

For more on the two companies, see:

We have 512 guests and no members online