@ DUKANG DISTILLERS' AGM: What happened to the baijiu market?

DUKANG DISTILLERS net profit tumbled from RMB390 m in FY13 to RMB44 m in FY14. It's not alone in suffering profit falls as its peers in the Chinese baijiu industry also suffered from the continuing austerity drive that has reined in spending at government events.

First off, someone asked: Why did Dukang increase its inventory sharply in FY14 when it expected sales to be challenging? That had led to a fall in the cash balance.

Financial Controller Raymond Ho replied that Dukang made bulk purchases of grain alcohol (for the production of baijiu) at a competitive price during the industry downturn. While sales may continue to be challenging, the grain alcohol can be aged for a few years for higher quality baijiu, resulting in premium pricing. 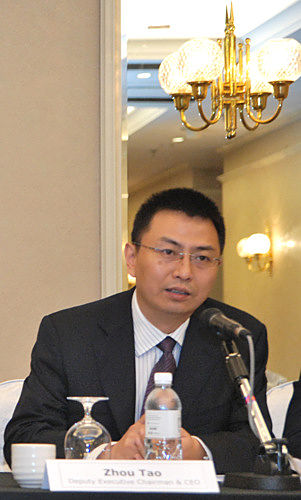 Executive chairman & CEO Zhou Tao.
NextInsight file photo.Chairman and CEO Zhou Tao said: "We cannot wait until an industry turnaround comes -- then we won't have enough grain alcohol to support our sales. The consumer base in China is largely intact but there is a shift in spending to the mid- to -mass-end of the market."

He added that the fall-off in the industry took place abruptly in 2013, affecting top-tier baijiu players such as Moutai and Wuliangye. Reacting to that, Dukang, whose sales of top-end products has suffered, focused on promoting its mid-end products and channelled its advertising & promotion budget to its home province of Henan.

In addition, the company has stepped up its online sales presence and customised some of its products to target younger consumers.

"The effects won't be immediate but please be patient."

Another shareholder was incredulous that the government's austerity drive was the key factor for Dukang's sales drop: "The government is your main customer?"

Giving a background on the industry, Chairman Zhou said that baijiu sales -- largely of top-tier brands -- in the past had been driven by luxurious consumption at official events and business events.

When the austerity drive started, the top-tier players cut their selling prices from, say, over RMB2,000 per bottle to below RMB1,000. As a result, sales of second-tier players such as Dukang were squeezed and it had to cut prices accordingly. 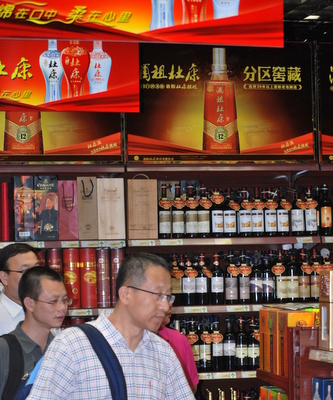 In Luoyang city, a store sells Dukang spirits. The product banner is displayed at the top of the shelves. File photo.While prices appear to have stabilised, sales of the top-tier brands have not picked up significantly.

Another shareholder asked about the sale last year of the site in Zhoukou of Dukang's production facilities of 'Siwu' baijiu products and its inventory of grain alcohol. Why was the sale at "a low price" of RMB55 million and was the buyer another baijiu player?

Independent director Calvin Tan said that the site, being located in the city, faced constraints in expansion.

What was sold was an empty piece of land. Dukang's operations there were consolidated with those at another site in Luoyang.

The sale price was not low as it took into consideration the valuation by two independent valuers.

The buyer, Excel Glow Holdings, is a Hong Kong-registered company whose main business is property development, he said.

This was mainly due to the decrease in average selling prices and sales volumes of Luoyang Dukang and Siwu products as Chinese government’s continued austerity measures affect the sales of wine and spirit across the nation.

In addition to the above, the Group expects a net loss for 1Q2015.
This profit guidance is based on a preliminary review of the unaudited financial results of the Group.

Further details of the Group’s performance will be released when the Company announces its unaudited financial results for 1Q2015, on or before 14 November 2014.
Quote
Refresh comments list
NextInsight.net

We have 2838 guests and no members online