SINO GRANDNESS: "One of my favourite counters" 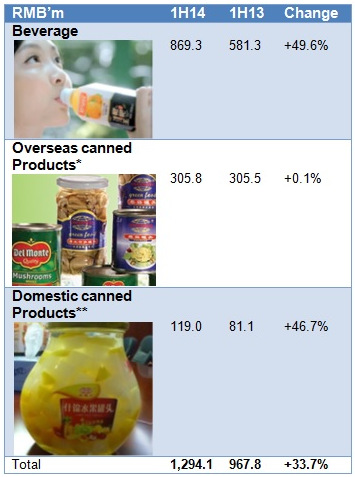 The company reported stellar quarterly results. 1H14 revenue improved 34% to RMB1,294 million from a year ago, while net profit increased 32% to RMB230 million, mainly due to an increase in sales by the beverages and domestic canned food divisions as well as higher average selling prices.

Current assets increased 27% to RMB1,346 million mainly due to an increase in receivables and inventories, thanks to the increase in business activities.

The company's focus is now on China's domestic market, as it would be intensifying sales & marketing activities, ongoing R&D, sales & distribution network expansion and production capacity expansion. Although CAPEX has increased, it may be offset by higher gross profit margins as the average cost of production would be reduced by its own factories instead of through third party business partners. 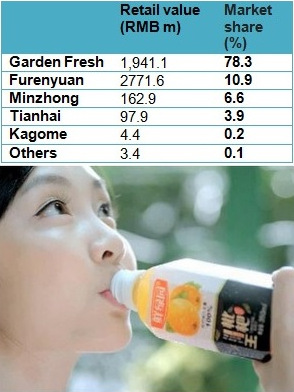 Loquat juice market data from Frost & Sullivan.The company is also in early stages of discussion with potential partners to export beverage products to overseas markets. The company is now trying to leverage on its distributors to reduce the cost of holding inventories, and none of the distributors accounts for more than 4% of sales currently.

Some statistics on loquat juice market in China: It is expected to have a compound annual growth rate of around 40% for the next 3 years to 2017 as consumers increasingly prefer healthier drink products.

Garden Fresh (a subsidiary of the company) is now the market leader with more than 70% market share of the loquat juice market, followed by competitors Furenyuan, China Minzhong, Tianhai Dongfang and Kagome.

The company is projected to ramp up juice production at its new Hubei plant with newly installed 240,000 tons per annum capacity and is optimistic about its operating performance in FY2014.

See also: SINO GRANDNESS: "Potential Investor" On The Horizon And What It Means

profit up, gross margin up

Receivables up
Inventories up

We have 2080 guests and 2 members online