Wee Kok Wah, President & CEO of Stamford Tyres, gave the following address to graduating students of the business school of Singapore Polytechnic on 26 May 2014.


Congratulations to the graduating students & to their proud families.

Good morning to members of the SP Board of Governors, Admiral Chan Weng Yip and Amanda Chen - Ladies & Gentlemen. Special greetings to Mr Tan Choon Shian,  principal of SP, and Reginald Wee, Director of SP’s Business School, who invited me to be the guest speaker. I am honoured and happy to be here. But when I received the invite I was a little worried. What should I say to business graduates of a 60-year-old well-respected educational institution.

I was asked to say how I became a successful businessman. Yes, I am now President of Stamford Tyres, a SGX-listed company with turnover of S$350M. But do Mr Tan and Reginald know that I was actually a very average student? In Secondary 4, I was in the worst class in St Andrew’s Secondary School -- it was called “remove” class. I was only one of the 2 students in that class who made it to A-level. 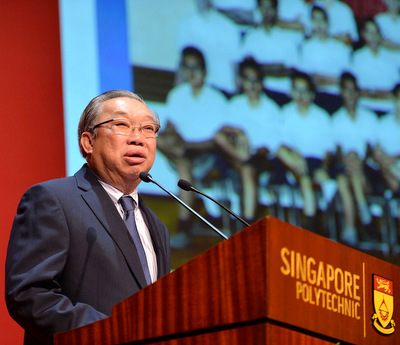 Wee Kok Wah with a slide (background) of his days in St Andrew's Secondary where he was an 'average' student.
Photo: Singapore Polytechnic At the then University of Singapore in Bukit Timah, I was playful and had to negotiate with my lecturers not to fail me.

Actually I had many friends in Singapore Poly – then at Prince Edward Road. I would often go there to play poker with them.

I graduated with only a “General” Degree in Economics/Law. But I was invited by the faculty head to a dinner for the top honours graduates.

This was in 1970 when young Singapore was developing fast. Many of my cohort with their honours degrees were embarking on careers in banking & finance and in traditional British trading houses like Harpers, Boustead & Inchcape. I, with my “General” degree, decided to join my father in the tyre business.

Stamford Tyres was founded by my father Wee Boon Kwee in 1930s as a petrol station & tyre shop in Stamford Road. After WWII, my mother gave her savings of $800 to him to restart the business at Seah Street/Beach Road. We had a petrol station outside the old Raffles Hotel and started a backyard retreading plant on land rented from Raffles Hotel. In the 50’s & 60’s Stamford was a Goodyear retailer/retreading plant serving the British Army.

Our history is very aligned to Singapore’s history.When Singapore gained independence in 1965, there was a big drive for industrialisation. The EDB gave us soft loans to move the backyard retreading plant to a modern factory in Kallang Industrial Estate. The then Minister of Finance, Goh Keng Swee, opened the factory in 1967.

At that time, Then Stamford Tyres was mainly a tyre retreading company servicing the British Army. When the British Army withdrew from Singapore in the 1971, I had just joined the business. I had to source for business from the contractors who were building Singapore’s infrastructure such as the Jurong Industrial Estate.

I drove a truck and collected tyre casings from construction sites and often worked bare chested in the hot retreading factory -- buffing tyres. I was the talk of the tyre trade then  My competitors called me a madman – “why go into this rough and tough trade when you are a graduate!!” They thought I should be sitting at a nice desk and working in air-con comfort. Well, that came later, but nothing trains you to be an effective CEO than starting from the bottom.

At the start, I found running a business really challenging and I was very driven and hungry. I was determined to build the business and make it successful. I had developed a passion for the tyre business. You could say the rubber dust got into my blood stream ...

I was in my early 20s. I knew that to grow the business I had to diversify from being a retreader to a distributor of new tyres – so I travelled to Japan and Europe to knock on the doors of the tyre manufacturers – and managed to secure several tyre agency lines.

As in running any business, once you secure opportunities you need financing. We depended heavily on bank loans – especially trade financing -- and cash flow was always tight.

So I embarked on looking for customers who could pay promptly and decided to embark on selling big OTR or giant off the road tyres to multi-national mining and forestry and construction companies. I travelled to the jungles and mining camps of Indonesia and East Malaysia. Also to Sri Lanka when they were constructing the Victoria Dam in Mahavali.

There was a civil war in Sri Lanka then but I was fearless. I made sure my taxi driver was a Tamil Tiger sympathiser when I went to areas controlled by them. Selling the giant tyres helped me fuel the growth then and provided adequate cash flow for the company.

Unfortunately my father passed away suddenly in the late 1970s. He did not have a will – so I decided that I will have to buy up the shares from my family members. With the support of my wife, we mortgaged everything we had.

My wife left a comfortable bank job and joined me on my mother’s insistence.

From a family-run business, we slowly turned the company into a more organised corporation. I decided to relocate to Jurong to bigger premises to facilitate our growing distribution business.  As Singapore is a small market I started distribution centres in Malaysia, Thailand, Indonesia and the Philippines.

Then in 1986 whilst I was busy building the business, I fell ill with kidney cancer. Lost a kidney – but bounced back to fight again. When news got out that I had cancer, our major banker, an American bank, withdrew their loan and gave me 3 months to pay back. I negotiated for 6 months.

I found Hong Leong Finance who was willing to finance me, but also made my brother in-law, a doctor, sign a personal guarantee on our behalf. It was with Hong Leong’s support in providing accounts receivables and inventory financing that helped us through this period.

As the business grew we were heavily dependent on bank loans and so I decided to take in private equity. The first being PAMA who took a 30% stake and set the stage for our public  listing.

We listed the company in 1991 on the second board. This gave us a bigger capital base to grow our overseas ventures. Singapore is a small market, so besides S.E.A, I also ventured to North Asia, Hongkong/China & South Korea, USA/S.America/South Africa/Australia.

But it is the SEAsian centres where we are most successful. Also business through the years was dynamic and I had to meet the changing trends – I knew that we had to value add more to our major brands like Falken and Continental so we started our retail chain in Singapore.


With all these expansion – again no money. So we negotiated with UOB to issue us a term loan with convertible warrants in 1996.

Then another major setback hit us in 1997. A fire destroyed our warehouse in Jurong. As we were rebuilding and recovering from the fire,  the Asian Financial crisis struck!!  But I gritted my teeth and stayed the course – plus the term loan helped us through….. BUT due to too much stress I fell ill with brain tumour. I had major brain surgery in the US in 1998 – recovered in 2 months and went back to work with another new lease in life.

I worked even harder…

We rebuilt our burnt down premises and opened a sparkling new corporate office in 1999.  We were upgraded to SGX mainboard in 2003. We started an aluminium wheel factory in Thailand in 2004.

We now have distribution centres in 11 countries – our warehouses can store 2 million tyres.

Our target sales per day is S$1 million.

As I was building & growing the business I always stayed focused on what  I knew best although there were times when the going was tough. But always remained positive and only looked forward. I always picked myself up from all setbacks and worked even harder.

In conclusion may I just remind you of some of the things I consider important :

√ Having a passion for what you want to do.

√ Being brave in pursuing your passion – take the path less travelled -- I didn’t follow the crowd into banking and corporate jobs and I suggest you follow your dreams.

√ Believing that you will be successful in overcoming the obstacles along the way. Always tell yourself "Never say die!

√ Building lasting, close and trusting relationships with family, friends and everyone you work with.

√ Above all, work hard to achieve all this

So congratulations once again, and come see me if you want to sell tyres! Thank you.

(To watch video of Mr Wee's presentation and other parts of the graduation ceremony, click below).

We have 576 guests and no members online