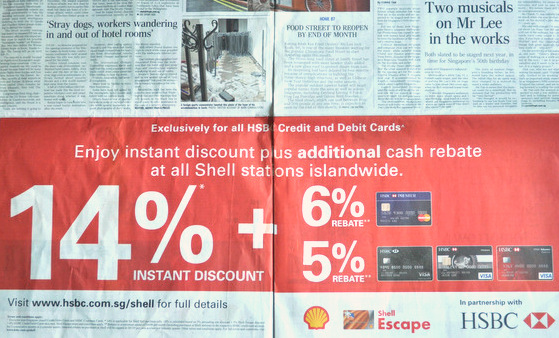 HSBC has an attractive promotion for its credit card holders whereby they enjoy significant discounts at Shell and Caltex petrol stations and other merchants such as Giant supermarts.

But there's one thing you (as a HSBC cardholder) may want to be mindful of.

This applies if you had cancelled a previous HSBC card and gone on to get a new card from the same bank.

Check if the cash rebates accruing to the previous one have been transferred to the new card.

If yes, you have a card-holder to thank for -- and his protracted efforts to ensure this is done.

Charles (not his real name) had cancelled his card in March 2013 after he noticed in the monthly card statement an item he didn't buy.

Fearing that his card had been compromised, he asked HSBC to cancel it and issue him a new one.

Sometime in Aug, he suddenly realised that the cash rebate for 1Q of 2013 had not been credited to his new card, he told NextInsight this week.

(The cash rebate, which is of varying percentages on the purchase price, is given when a cardholder makes a minimum of S$600 in "eligible purchases at participating merchants per month for all 3 months in a quarter.)

Charles contacted HSBC, expecting not just his entitled rebate to be credited to his new card but also a simple explanation from the bank. He said he had a frustrating experience.

On 15 Aug 2013, he wrote to HSBC asking why no quarterly cash rebate had been given to him.

"I asked HSBC what the amount was for. After several reminders and phone calls, the bank replied on 13 Sep that 'the reason that the first quarter cash rebate was not credited into your account was due to a technical glitch'.

On the same day, he sought clarification, particularly on the 'technical glitch' and how it came about. Again, only after several reminders and phone calls, HSBC replied on 24 Sep: "...the reason that the first quarter cash rebate was not credited into your account was due to your previous credit card was reported lost."

As the reply did not explain the technical glitch, Charles reckoned that the system was configured to track a card-holder's purchases by his card number, and did not auto-credit the rebate to a new card (as it had a new number) when the previous one was cancelled.

Still seeking to understand the "technical glitch", he wrote to the Monetary Authority of Singapore, pointing out that financial institutions ought to maintain their records properly and must be transparent.

The MAS forwarded Charles' email to HSBC which, on Nov 25, emailed to Charles: "We can understand your frustration and unfortunately we have no valid excuse for the service lapse. The issue has been highlighted to the relevant team for further review and improvement to facilitate better banking experience.

"There were some customers impacted due to this issue for whom we have done a manual credit to their account when the concern was raised."

Charles said he asked HSBC if it had told affected cardholders the cause of the lapse.

"HSBC has declined to answer."

Why doesn't Charles just stop being a customer of HSBC? He said: "Other credit card issuers are reluctant to issue cards to senior citizens like me."

In the meantime, the discounts at, mainly, Caltex and Giant keep him using his card.

+1 #3 skeptical now 2014-02-19 16:15
Why decline to answer? Surely an answer is owed and necessary? As a customer I'd appreciate knowledge if lapses occur. Is it because HSBC thinks that keeping mum about it would prevent floodgates of complaining from opening? Surely honesty and transparency compromises institutional integrity less than dishonesty and secrecy? If I were HSBC, I would rather deal with complaints than a compromised image of integrity.
Quote
+1 #2 Concerned Card Holde 2014-02-19 16:11
How can HSBC fail to notify its customers? It is simply unacceptable practice! "Cash is King" you are missing the point. Whether Charles uses the rebates or not is inconsequential . The core problem is that HSBC owed its customers certain fundamental duties of service: one of which is to dutifully notify its customers should such discrepancies occur. I just checked my bills and realized that the same happened to me. Although I haven't been conscientiously checking my bills, I am deeply appreciative of Charles' efforts. Had he not pressed the case, I would not have been given my due rebates.
Quote
-1 #1 Cash is King 2014-02-09 16:38
In the first place, why keep so much cash rebate? Use along the way.
Quote
Refresh comments list
NextInsight.net

We have 385 guests and no members online