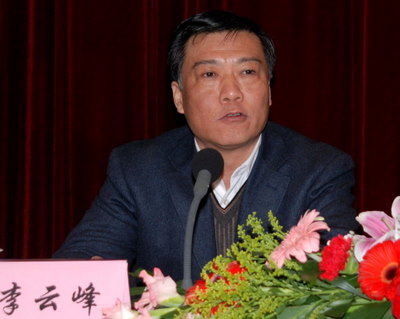 Li Yunfeng, 55, is a PhD holding deputy governor of Jiangsu Province who often is looked to for guidance on financial and economic affairs. Photo: hudong.com

Translated by Andrew Vanburen from a Chinese-language piece by Li Yunfeng in nbd.com

HERE'S A revolutionary thought... If a company’s share price is down on the year, maybe its executives shouldn’t be getting barn-burning bonuses and majority shareholders diva-like dividends?

Last year, China’s stock markets were some of the worst performers in the world, but executive bonuses and majority shareholder dividends hit an all time high.

This leaves investors in these struggling firms hanging high and dry.

Therefore, in my opinion, it is high time we start focusing more on maximizing ordinary shareholder returns among listed companies and not squandering all the profitability of a firm into year-end bonuses or golden parachutes for executives.

Earlier this week, speaking at the annual legislative gathering in Beijing, Central Committee Chairman Feng Peien explained that last year, the Shanghai and Shenzhen bourses fell by 21% and 28%, respectively, giving them the dubious honors of being at the forefront of the global securities selloff.

This led some 50 million or so shareholders in Mainland China alone losing up to 87% of their portfolio’s value in calendar year 2011.

This translates into an average loss of 40,000 yuan per person for these poor souls.

Lest you think that retail investors were the only ones to suffer last year, institutional investors over the same time period reported losses in excess of 400 bln yuan.

With all this in mind, Mr. Feng appealed to regulators – as well as executives' better angels – to control runaway bonuses as well as the implementation of higher capital gains taxes on what he sees as overly generous severance packages to departing executives of various listed enterprises, as well as far too kind a dividend policy toward majority shareholders.

It is understandable that listed companies are inclined to bend over backwards to thank their executives and board for a job well done.

But in the process, they mustn’t forget that the ordinary, retail shareholder who is in the trenches everyday protecting the firm’s share price is also worthy of an occasional pat on the back.

Therefore, executive bonuses given to upper management and board members should not be divvied out to the exclusion of an occasional dividend paid out to loyal – albeit minority – shareholders.

Let’s look at the numbers.

Within the A-share markets, since 1990, A-shares have accumulated around 4.3 trillion yuan in capital investment.

But most telling is that, according to an analyst with a Shenzhen-based brokerage, ordinary shareholders got just 540 billion yuan of this.

Breaking away from this cycle of privilege for majority shareholders and executives in terms of bonuses and dividend policies can go a long way toward boosting confidence in the fairness and attractiveness of the capital markets.

We have 2339 guests and no members online