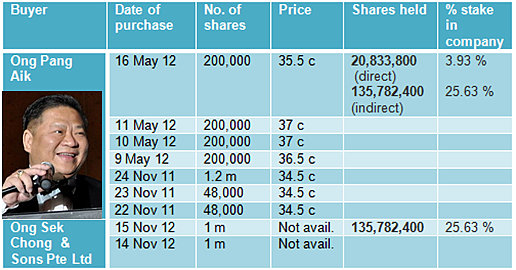 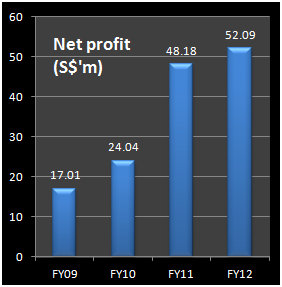 Lian Beng's profit track record. The dividends have also been marching upward, from 0.6 cent a share for FY09 to 2 cents a share for FY12.

SHARES OF Lian Beng Group have become the target of purchases by insiders in the past one year as the company’s profitability continued to march upward.

This is an Ong family investment vehicle named after Ong Sek Chong, the company's founder and the father of Lian Beng's current chairman and MD Ong Pang Aik.

His purchases in Nov 2011 were his first in about a year, as his prior purchase was way back in October 2010. 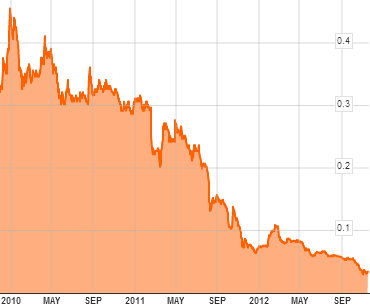 Oceanus shares have been falling hard and the business now has a market cap of just S$79 million. Chart: Bloomberg

The transactions were done at the rock bottom price of 3 cents a share.

The Oceanus shares were bought by Great Ocean Partners at 7.2 cents apiece in August 2012 under a loan restructuring exercise.

Mr Ngan still holds a direct interest in Oceanus of 17.5 million shares, or a 0.69% stake.

He has been a shareholder even as far back as 2008 when Oceanus was listed via a reverse takeover.

At that time, he took up 14 million placement shares at 20 cents apiece on top of 5 million shares that he already held.


For some background on the troubles that have assailed Oceanus in the recent past, read:

@ OCEANUS AGM: Strategy for recovery and 'very good result' in 2015

@ OCEANUS AGM: Rare case, ex-CEO voted out of board

We have 2259 guests and no members online