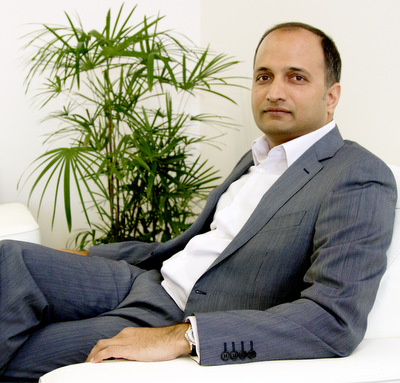 Sudeep Nair, 42, promoted to CEO of Food Empire on Oct 2.

SUDEEP NAIR, 42, has spent about half of his life living in Russia, and is married to a Russian.

Since his mid-20s, he has been working for Singapore-headquartered Food Empire, then a fledgling business which he played a key role in its growth to become a major F&B company listed on the Singapore Exchange.

From nothing, Russia has become the largest market for Food Empire's 3-in-1 coffee and other F&B products.

Captivated by, particularly, Food Empire's MacCoffee, Russia contributed US$129.4 million, or 57%, to the company's sales in 2011.

An Indian citizen who has held Singapore permanent residency since 1997, Sudeep was promoted to CEO just a fortnight ago on Oct 2. 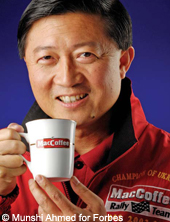 Tan Wang Cheow, executive chairman, on the cover of Forbes.

That takes him up from being an Executive Director of the company (www.foodempire.com) since July 2005.

Sudeep's promotion is part of a succession plan, whereby founder Tan Wang Cheow, 54, ceases to be the company's MD but remains as Executive Chairman.

Much of Sudeep's financial worth is tied up with Food Empire: He directly owns 31.1 million shares and has a deemed interest in 4.68 million shares, according to an official filing posted on the Singapore Exchange website.

If you take the recent stock price of 45.5 cents, the aggregate value of his stake is S$16.3 million.

I engaged Sudeep in an e-mail interview -- he responded from Moscow, where he lives, after returning from a business trip to Southeast Asia. 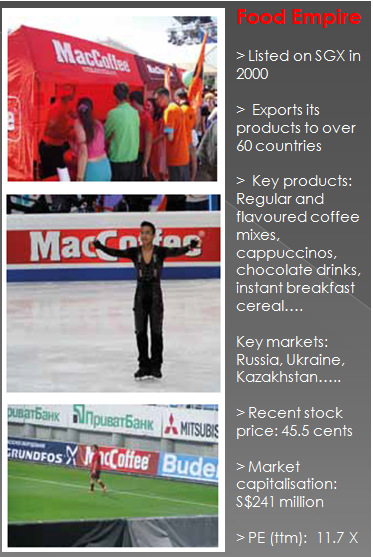 MacCoffee is the best-selling 3-in-1 coffee brand in Russia, thanks to creative and aggressive sponsorship of events by Food Empire.

Q: Congrats on your appointment as CEO! What happens, as a result, in terms of where you work and will you relinquish day-to-day oversight of the Russian and CIS markets? What might your work focus shift to?

Sudeep: Thank you very much. Over the last few years, I have relinquished day-to-day oversight of Russian and CIS markets and can proudly say that we have a very good management team in place that’s not only experienced but is well-proven.

Currently, I am involved in our Russian and CIS business more through my strategic inputs and there's more of new business development rather than day-to-day management.

Hence, this setup allows me to spend more time to develop and work on new projects for Food Empire not only in Russia but also other continents.

We are working on several new projects that in the next 3-5 years will allow us to establish a reasonable base in Asia and especially Southeast Asia, and we would be better prepared for our next phase of growth.

Q: You have lived a long time in Russia, which must be a fascinating experience. And of course, the work would have been most satisfying as the revenue and profits from this market have surged. But to begin, tell us about the non-work related experiences.

a. What do you do on a typical weekend there?

Sudeep: A typical weekend would be mainly dedicated to relaxing with my wife and daughter if I am in Moscow. Usually, we would head to our countryside house about 70 km outside of Moscow near a forest and waterside. We would go for long nature walks or cycle if the weather permits. Some weekends when we have some celebrations we would be with friends.

Sudeep: I like very much Russian food for breakfast --- varieties of porridge items made from buckwheat, oatmeal and baked sweet cottage cheese pie and pan cakes..

I also enjoy a variety of salads for lunch or dinner. Fortunately, my wife who is a Russian citizen cooks very well -- she can do both Russian and some Indian dishes. Russian cuisine is very rich and offers a great variety of dishes.

c. Do you live in an apartment or a landed property? What’s the neighbourhood like?

Sudeep: In Moscow, we live in an apartment and our countryside house is a landed property. The neighborhood is a suburb in Moscow with developed infrastructure and nature parks.

d. How do you commute?

Sudeep: It's a BMW 7 series sedan 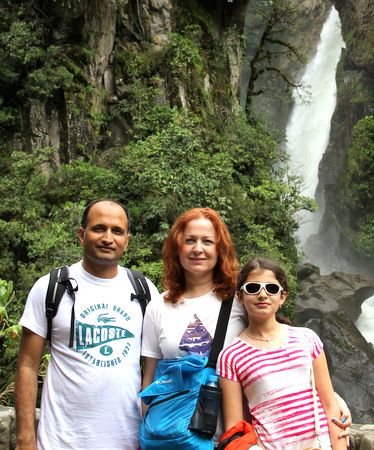 e. Your wife is Russian. How did you meet her? And tell us about your children.

Sudeep: I met my wife, Irina, at work. She joined our office to help me with office administration and marketing.

She was very involved with our first ever branding and marketing communication strategy that we implemented in 1995 as a result of which MacCoffee became a well known brand. When we got married in 1998, she resigned from work and our daughter Anastasia was born the following year (1999).

f. Are you now more Russian than Singaporean?

Sudeep: I can’t say I am more Russian but definitely I understand the Russian soul better after spending 17 years in the country, and I can relate to locals very easily. Initially, it was difficult but when one lives here and mixes around, one starts to understand how locals think and mainly why they think that way.

g. For you, what’s particularly gratifying about living and working in Russia?

Sudeep: My living and working in Russia has brought success to the company and myself. It has been a great learning journey so far. We have seen so many changes from 1995 till today and still the country is changing for the better all the time and it's a very dynamic market.

Great resilient people, fantastic business opportunities. Russia has four seasons and a beautiful countryside. Moscow offers the best of any European city in terms of culture, shopping, entertainment. The only problem is increasing traffic jams over the years.

Q: You must know a couple of things about coffee that most people don’t. What might some of these be?

Sudeep: According to legend, Kaldi was an Ethiopian goat herder who discovered the coffee plant. Noticing that when his flock nibbled on the bright red berries of a certain bush they became more energetic goats, Kaldi chewed on the fruit himself.

His exhilaration prompted him to take the berries to an Islamic holy man. But the holy man disapproved of their use and threw them into a fire, from which an enticing aroma billowed. The roasted beans were quickly raked from the embers, ground up, and dissolved in hot water, yielding the world's first cup of coffee.

That's a legend - and here is an interesting fact: Coffee is the second most traded commodity in the world, second only to oil

Q: If I stopped 10 Russians on the street and asked if they knew of MacCoffee, would at least 8 answer ‘yes’?

Sudeep: Most probably yes, at least more than 5 people would know the brand MacCoffee.

Q: Through sponsorship of events and through advertising, MacCoffee has gained significant mindshare among target consumers. What are some of the most creative efforts your team has executed?

Sudeep: The most creative was our launch campaign in 1995-96 that’s still remembered by many people. It was a TV clip showing the concept of 3-in-1 using a black man, snow and cow depicting coffee, sugar and creamer, respectively.

The clip won an international award. In recent years, we have sponsored sports events like the European figure skating championships, and the UEFA soccer championship.

The clip that Sudeep referred to is here.....all 19 seconds of it.

You will enjoy also this one, a more recent sizzling 43-second clip from Youtube on MacCoffee which aired on Russian TV.

Q:  What has been a particularly tough period for Food Empire in Russia? How did you all navigate the storm?

Sudeep: The most difficult period was 1998-2000 when the Russian economy collapsed under low oil prices. It was then a very young democratic country just out of decades of communist rule.

Business was fragile, the law-and-order situation was poor, and the local currency, the ruble, was in free fall. Our business was still new and we were relatively inexperienced. We survived. Later came the global financial crisis of 2008-9 that also affected Russia.

It was a different crisis with less panic but a severe one that affected all countries. We were more experienced but now the scale of the event was larger and the crisis also affected Singapore so it had to be managed on all fronts. Well, we survived!

We have 3267 guests and no members online