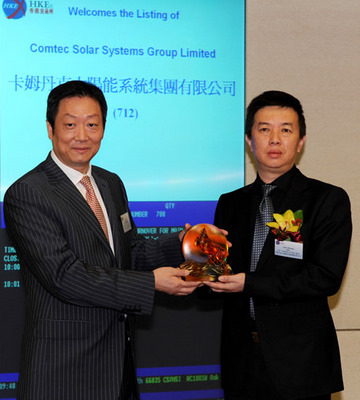 COMTEC SOLAR Systems Group Ltd (HK: 712), a global leader in monocrystalline solar wafer production, is braced for the possibility of a slowdown in the global solar power sector.

But thanks to its technical savvy and "disciplined" financial management, it is not yet seeing a worldwide demand dropoff for solar wattage buildup, said its chairman at an investment conference in Shenzhen.

"We all are aware that Chinese solar power enterprises listed in the US are mainly on the losing side of late. But we are more disciplined, focused and financially responsible.

"To date, we have not seen evidence of the ongoing global economic crisis cutting demand for solar wattage additions. In fact, we are seeing orders for our products steady or on a rising trend," said Mr. John Zhang, Chairman of Comtec Solar.

However, despite sales being up this year, net profit did decline on a year-on-year basis due to capacity expansion expenses and relatively weak selling prices.

Comtec chose to list in Hong Kong in 2009, bucking the trend of several of its domestic peers which have gone public in New York.

Although Comtec didn't expect things to return overnight to the frenetic days of bulging order books and breakneck capacity expansion seen late last decade, there was more than a ray of hope poking through the cloudcover for Comtec’s solar ambitions. 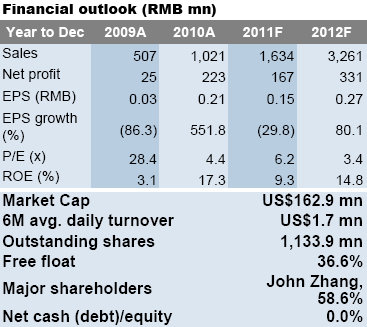 “Demand for our products should keep climbing steadily," he said.

In fact, Comtec expected its sales to double next year to around 3.3 bln yuan.

"Yes, some capacity in China will be phased out by our peers – we are seeing that already. But we don’t plan such moves,” he said.

As for next year, Mr. Zhang offered a partly cloudy and overcast market outlook.

“We expect that in 2012, global demand and capacity will rise, but prices are likely to stay flat.”

But Shanghai-based Comtec believed it was prepared for the tighter margin environment of 2012.

“In the upcoming climate of heightened price competitiveness, we must and will maintain our technological advantages to protect our average selling prices (ASPs),” he said.

To this end, he said that given Comtec’s position high up on the technological totem pole, the Hong Kong-listed firms’ chief rivals were more likely to be neighbors rather than compatriots.

“As we are one of the higher-end producers and we are witnessing some consolidation of domestic lower-end outdated or outmoded wafer makers in the country, our most significant competitors both now and going forward are likely to be peers from Japan and South Korea.”

Therefore, Comtec’s total year-end capacity of 600 megawatts in three sizes: 125x125 mm, 156x156 mm, and 210x210 mm with thicknesses ranging between 170-190 microns, would need continuous R&D efforts to stay on top of the sector, a feat which Mr. Zhang said Comtec was wholly capable of performing.

Comtec Solar is a pure-play monocrystalline solar ingot and wafer manufacturer based in Shanghai focusing on the design, development, manufacture and marketing of high-quality solar wafers. It is one of the first such manufacturers in China to be able to mass produce 156mmx156 mm monocrystalline wafers with a thickness of approximately 170 microns. As one of the pioneers in the manufacture of semiconductor wafers in China since 2000, it began making ingots and wafers for solar use from 2004. Since then, its main focus has shifted to the solar industry to cater to the increasing demand for its top-quality products. Comtec listed in Hong Kong in 2009.

We have 2428 guests and no members online