SUNMART's Q&A with investors, gets nod for Korea listing 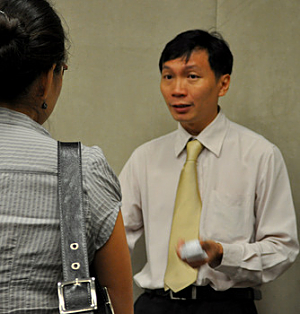 After his presentation & Q&A session at CIMB, Sunmart CFO Ho Soo Hui has more questions to field from investors. Photo by Leong Chan Teik
IT HAS been a good week for Sunmart Holdings' shares, as it rose16.7% from 21 cents at the start of Monday to end at 24.5 cents on Friday evening. It has been spurred no doubt by the company's announcement during Friday's lunchtime that it had received approval from the Korean stock exchange for a dual listing.

Investors had gained further insights into its business - and warmed up further to it - after Sunmart's CFO, Ho Soo Hui, gave a presentation at CIMB. The following Q&As were published on Wednesday by CIMB.


• Q1: What are the uses of proceeds from your KDR listing?

Sunmart will invest or 40% of the proceeds in new plant and machinery, to expand its manufacturing capabilities. 55% of proceeds will be used to repay bank loans. The balance will be utilized for working capital.

• Q2: How much has Sunmart spent on listing so far?

Sunmart has spent around S$3m – 4m on the dual listing. 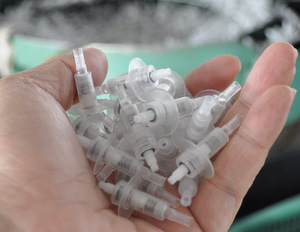 These are parts of spray pumps that squirt out, when pressed, perfume or hair spray, for example. Photo: Leong Chan Teik
• Q4: What is your market share in China?

Though there are no official figures, Sunmart estimates that they have around 10% market share in China. The market is largely fragmented, and Sunmart faces competition from two to three rivals, estimated to be 70-80% of the size of Sunmart.

• Q5: How will a stronger Rmb affect your business?

Sunmart will not face much pressure from a stronger yuan. Sunmart’s products accounts for an insignificant portion of the end product’s selling price. In addition, Sunmart’s prices could be 50% lower than its foreign competitors, though its quality is may be 90% that of its foreign competitors. Sunmart is confident that it is able to pass on any additional costs to the clients, and should be able to maintain its gross profit margins. Sunmart has targeted a 30% GPM going forward.

• Q6: What is your utilization rate?

Sunmart’s total annual production capacity stands at 800m units. However, the firm has targeted an 80% utilization rate, as a 10-20% redundancy buffer is required to meet new or last minute orders.

Q7: Who are your major clients?

Sunmart’s clientele base is diversified, with no client contributing more than 5% to its total revenues. Sunmart has over 2,000 clients in over 80 countries across Asia Pacific, North and South America, Europe and Africa. Currently, over 60% of Sunmart’s products are sold overseas. 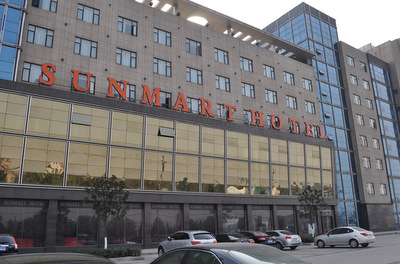 Sunmart's hotel in Jiangyin city about 3 hours' drive from Shanghai. Its management is outsourced for RMB2.5 m a year - a return that analysts consider to be low. Photo: Leong Chan Teik
• Q8: How is the demand for your KDR?

Sunmart will commence the book building process once its KDR listing is approved by Korean regulators.

• Q9: What are the plans for your investment property?

Sunmart owns a hotel, classified as an investment property and is recorded at cost in the books. The hotel is currently rented out and Sunmart does not have plans to sell the hotel for the moment.

SUNMART: Dual-listing in Korea is just around the corner

We have 2072 guests and no members online