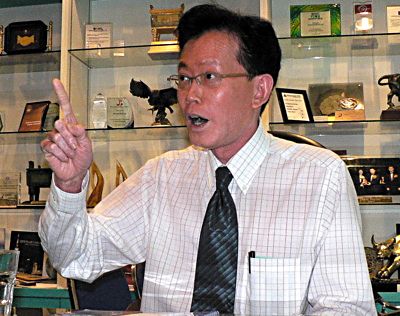 COURAGE MARINE had a terrible time in the first 9 months of last year, suffering a loss of US$2.9 m compared to a net profit of US$39 m previously.

The shipping group was dragged down by low freight rates and low utilisation rates - not uncommon woes in the shipping industry then.

There is one thing that shipping companies with low debt such as Courage Marine might just do in times like that.

They go looking to buy vessels at, hopefully, good prices.

True to form, Courage Marine on Tues night (Jan 26) announced that a wholly-owned subsidiary had on 26 January entered into a Memorandum of Agreement to purchase a secondhand vessel, MV Constantinoupolis for US$7,850,000.

It said it would fund the purchase completely from its internal resources. After all, with US$38.5 million in cash and cash equivalents as at Sept 2009, Courage Marine is well placed to do so.

Courage Marine provides marine transportation services with its fully-owned and operated dry bulk carriers. The fleet is deployed primarily in waters around the Greater China region as well as Japan, Vietnam, Bangladesh, and elsewhere in Asia.

The other thing to note about the purchase is that the age of MV Constantinoupolis – it was built in 1981 in South Korea with 128,150 Dead Weight Tons.

This 29-year-old vessel joins Courage Marine’s fleet of 8 vessels which are not exactly young and gleaming either: the average age is about 25 years.

Courage Marine expects to take delivery of the vessel between 22 February and 15 March, and expects it to contribute to the revenue of the Group in the current financial year.

Since its inception in 2000, Courage Marine (which was listed on the Singapore Exchange in 2005)has specialized in operating older vessels.


The company knows how to operate old vessels efficiently and maintain them efficiently - after all it is steered by five industry veterans who collectively have over 150 years of experience in the dry bulk shipping industry.

That’s why Courage Marine has made handsome profits in the past.

See the table abov for the amazing profit margins of 50% and above. And note the dividends.

Based on the current stock price of 18.5 cents, the historical dividend yield is around 14%. Chances are not high that a dividend payout of this size would be repeated for FY09 as the company had suffered losses in the first nine months of the year.

There are just a few days or weeks before we know: The company will be reporting its full-year results this month or the next.

We have 630 guests and no members online