"Keep YZJ As An Outperform With Increased Target Price Of S$1.55" 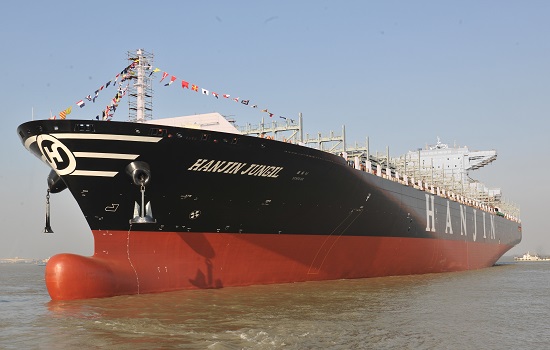 Yangzijiang is becoming a serious player in the large vessel space. Above: Its first 10k TEU vessel delivered from Xinfu Yard. Photo: Company

YZJ’s dependence on offshore rigs orders is declining which works to its favour given the current oil climate. We think YZJ could beat consensus with better than expected shipbuilding orders at higher prices. At 8x 2015E P/E and 1.0x 2015E P/B with 13-14% ROEs, the stock looks attractively priced in our view.
Bulk carriers and containership prices to rebound
» Price have bottomed out in 2013, rebound backed by fundamentals
» Demand for both bulk and container trade continues to grow, post-2008 dip.
» While supply has yet to catch on: orders for bulkers to be delivered in 2017 not yet filled, and containerships for 2016 and 2017 delivery barely filled.

Becoming a serious player in the very large vessel space
» Secured 7 very large bulker orders (>200,000 dwt), 4 are the first of its kind on its order book; the 260,000 dwt bulk carriers
» Secured 6 new 10,000 TEU containership orders with an additional outstanding option for 2 more after having successfully delivered 6 of these ships
» Management also intends to offer the larger 16,000 TEU and 18,000 TEU vessel types to bolster their capabilities
» Focus on shipbuilding and move from offshore has paid off given the current oil climate

We have 703 guests and no members online