Given the excellent 1H2022 operating cashflow (Ebitda US$163 million and capex of just US$2.9 million), Geo Energy was well placed to continue its track record, since 2021, of declaring quarterly dividends.

Based on its dividend and PE metrics, Geo Energy's stock looks undervalued: 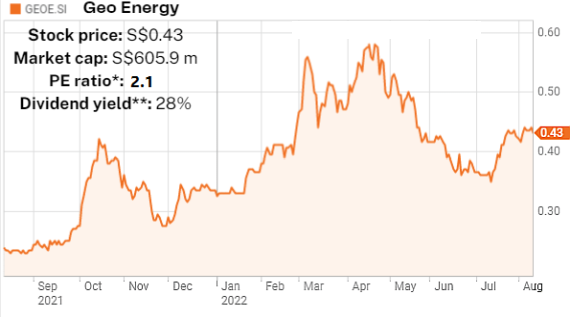 * Based on annualised earnings of 1H2022.
** Based on 2H2021-1H2022 dividends totalling 12 cents.
Chart: Reuters
Geo Energy said it delivered 5.2 million tonnes of coal for 1H2022 with over 0.2 million tonnes for June vessels only recognised in July after completion of loading.

This was slightly lower than the 5.4 million tonnes of coal in 1H2021, after adjusting its mining plan following the temporary coal export ban in January 2022.

The Group achieved production of 5.5 million tonnes in 1H2022.

"We remain on track for our target of 12 million tonnes coal sales for 2022. Our production volumes are typically higher for the second half of the year due to seasonality," said Geo Energy in a statement.

As part of its Domestic Market Obligations (“DMO”), wherein it has to sell 25% of its annual volume to domestic power producers, Geo Energy sold 36% locally in 1H2022.

As a result, the Group's 1H2022 average selling price (ASP) was lowered as DMO sales have a price cap of around US$38 per tonne.

"By fulfilling a higher DMO volume in early 1H2022 when ICI4 (coal) prices were lower, the Group expects to achieve a higher ASP with more export sales in 2H2022." 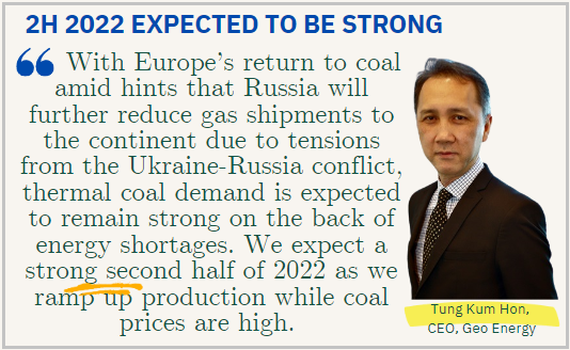 We have 2408 guests and no members online