GEO ENERGY: Why its stock price has climbed steeply 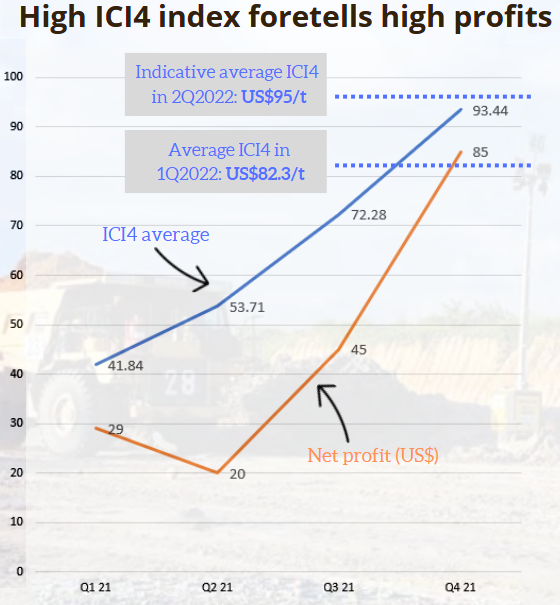 1. The quarterly net profit of Geo Energy correlates with the quarterly ICI4 average. Nothing surprising there, but there was an anomaly in Q2 2021.

What this suggests is that, based on the above chart, Geo Energy's 1Q2022 net profit could be roughly US$80 million.

In reality, the figure is likely to be lower because in that quarter, Geo Energy sold 51% of its coal to the Indonesian domestic market, instead of the 25% level it is obligated on an annual basis.

Geo Energy did so because of a shortage of coal being sold domestically for power genereation, which triggered a power crisis and led to a temporary export ban on all miners by the Indonesian government.

3. What 2Q2022 profit looks like: ICI4 futures are currently hovering around US$95 / tonne, according to cmegroup.com.

Futures can, and do, fluctuate from day to day, week to week.

If US$95/t turns out to be the average for 2Q 2022, the profitability of Geo Energy could be US$100 million -- assuming there's no surprise fall in its coal production/sales.

That would be a phenomenal result, aggregating the 1H2022 profit to more than S$200 million.

Compare that with its market cap of S$800 million. 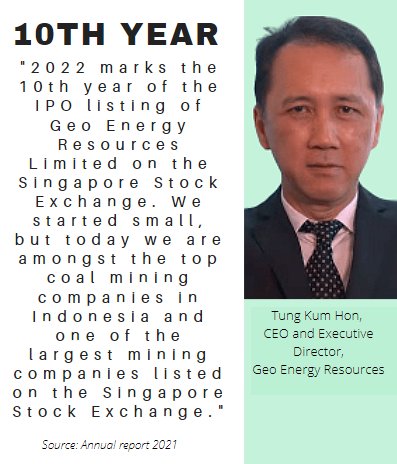 To be clear, these are speculative numbers but they are within range of Geo Energy's own forecasts.

We have 230 guests and no members online