Revenue was US$78.4 million at an average selling price of US$55.05 per tonne, weighed down by the capped price for domestic sales. 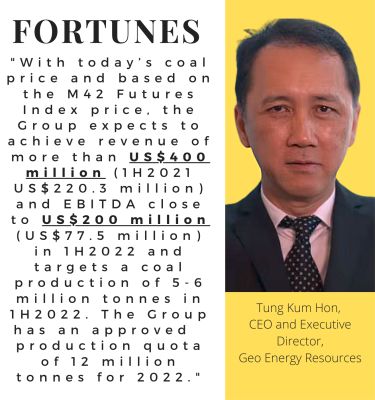 The Group’s domestic market obligation (DMO) volume was 51% of the total volume it sold in these months, which is much higher than the DMO of 25% of annual sales.

Fortuitously, by selling a higher proportion of its DMO in Jan-Feb 2022, Geo Energy now benefits from the prevailing higher export prices for its coal.

Based on the prevailing coal price of US$95.46 per tonne and DMO sales of 25%, Geo Energy said its cash profit is above US$40 per tonne.

For an idea of the profitability, consider that Geo Energy has been granted a production quota of 12 million tonnes this year.

It's a windfall just waiting to unfold, with a gush of dividends expected to be repeated.

With its windfall last year, Geo Energy paid out 4 cents/share interim dividends and has proposed a final dividend of 5 cents a share.

It's a record payout of 9 cents/share:

Among other things, its EV/EBITDA (2021) was only 1.4 times, and will be even lower going forward with the profits that are potentially gushing in this year.

Now, let's do a bit of crystal-ball gazing.

As mentioned above,  Geo Energy's 2021 dividends total 9 cents/share, which equates to a 16% yield on the recent stock price.

If the 2022 dividends stay unchanged at 9 cents/share, the 16% yield would once again be breath-taking.

And if higher profits propel Geo Energy to raise dividends .... that's not an unreasonable thought for investors to hold but let's see if it happens.

While Geo Energy had a massive US$191 million cashpile as at 31 Dec 2021, a hoard that is growing by the day or week,  it has signalled its intent to diversify into adjacent businesses and is preparing a war chest.

We have 636 guests and no members online