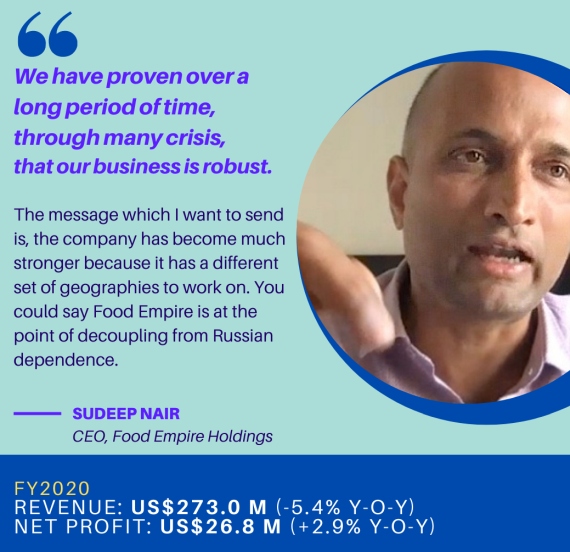 Food Empire Holdings reported a robust US$26.8 million net profit for FY20 in the face of business challenges due to Covid-19 and a devaluation of the Russian and Ukranian currencies.

In the absence of the latter, or US$2.3 million in forex loss, the net profit could have reached US$29 million.

Food Empire is a Singapore-listed global branding and manufacturing company in the food and beverage sector. Its products include instant beverage products, frozen convenience food and snack food.

Food Empire surprised with its FY20 dividend payout, proposing 2.2 cents as a first and final ordinary dividend subject to shareholders' approval at the AGM.

The surprise was in its classification as an ordinary dividend.

In comparison, the FY19 ordinary dividend was 1 cent. But in that year there was also a special dividend of 1 cent.

Special dividends are, by definition, given under a set of circumstances not expected to repeat every year.

So does the "ordinary dividend" of 2.2 cents send a certain signal?

CEO Sudeep Nair said an investors' briefing: "We just want to convey our level of confidence in the transformation of the company. We are generating more and more robust cash every year so we want to signal we are confident that we can manage the business even in a crisis."

Revenue dipped 5.4% y-o-y owing to factors such as:

The US$273.0 million group revenue, once again, tells of Food Empire's successful diversification strategy over the past decade or so.

Of the US$273.0 million, about US$100 million was contributed by the Russian market.

This is virtually unchanged since 2010 when Food Empire Holdings had already emerged as the No.1 player in the 3-in-1 coffeemix market in Russia with sales of about US$100 million.

Below is a snapshot of where the business has taken root and progressed in FY20: 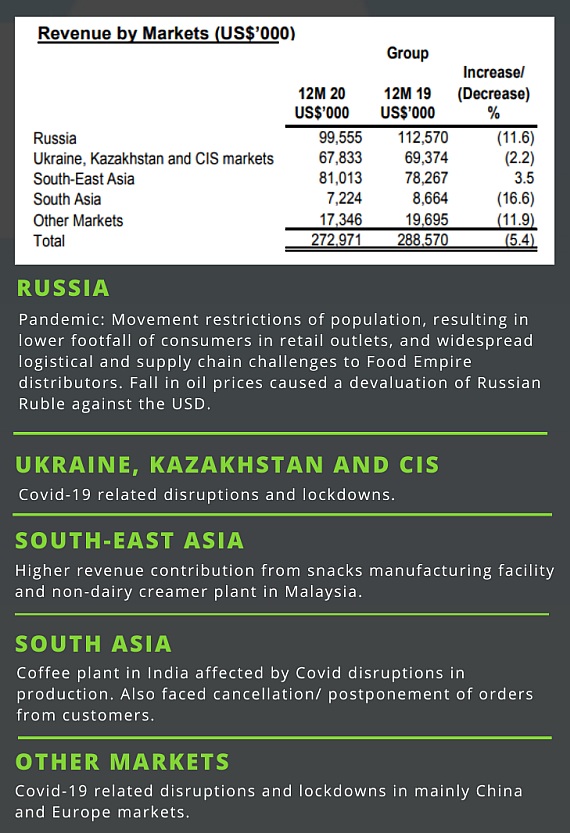