The share buyback would have helped to attract attention to its undervaluation.

But its balance sheet was quite pretty: Zero borrowings and nearly US$40 million (about S$54 million) in real solid assets which comprise cash, bonds, quoted and unquoted funds (as highlighted below): 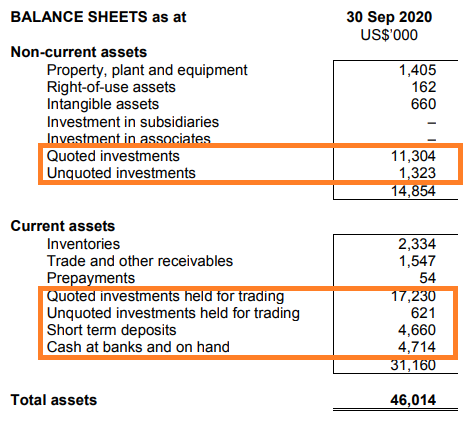 All this is not to say Trek is a stock to buy.

The accumulated holding of cash and investments is clear for investors to appreciate but there are significant issues to note, including:

And by the way, does anyone know why Trek appointed a restructuring veteran, Neo Ban Chuan, 68, as a non-executive independent director this month?

Mr Neo was previously the Head of Restructuring with one of the Big Four accounting firms in Singapore.

Is he to help restructure Trek?