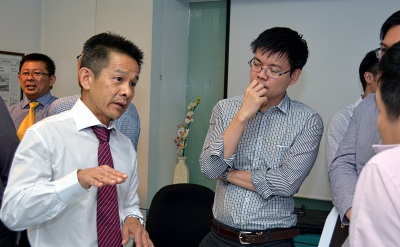 Executive chairman and CEO Wong Teek Son owns a 50.75% stake in Riverstone. NextInsight file photo.Riverstone, based in Malaysia, has been steadily increasing its production capacity over the past 6 years -- from 3.1 billion to 10.4 billion.

The capacity has been well-utilised and, notably, has generated revenue and profits that cushioned a fall in gross margins for its healthcare gloves, which are used in places such as hospitals and pharmacies.

The global market continues to grow, so Riverstone's not done yet with capacity expansion.

Other glove producers have reportedly increased capacity also -- but the market is massive and growing, and Mr Wong is confident that Riverstone's new capacity can be taken up.

For healthcare gloves, the global market is expected to grow at 8% per annum on a large base of 268 billion pieces of gloves in 2018.

Through the years, Riverstone's production growth has generated positive operating cashflow which, in turn, has sustained its dividend growth, as this chart shows: 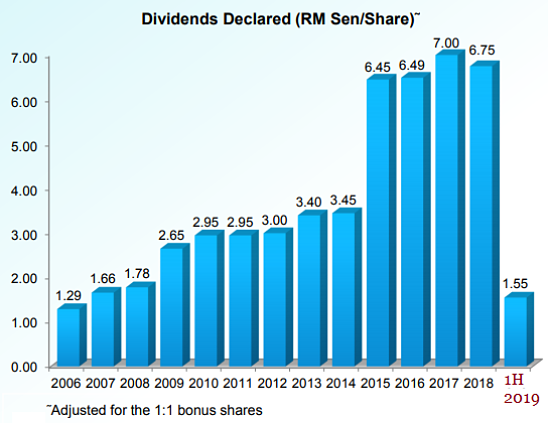 Riverstone's dividend track record since its IPO in Nov 2006. In recent years, its payout ratio has hovered around 40% of earnings, with dividends mostly paid out as final dividends after the end of FYs.

Aside from higher production output, Riverstone's outlook for 2H2019 seems to have brightened because raw material prices (principally butadiene) have trended down.

The company's selling prices of healthcare gloves are adjusted monthly according to raw material price movements, on a cost-plus basis.

By revenue, healthcare gloves contribute about 75% of Riverstone's revenue and come with lower gross margins.

In contrast, its cleanroom gloves used in high-tech manufacturing facilities have greater price resilience, as they are adjusted quarterly, which could translate into higher profit margins.

For an idea of the operations of Riverstone, watch our video taken during a visit in 2013 -->

We have 587 guests and no members online