In Jan 2018, as though to mark their first anniversary, SMG and CHA announced their JV's acquisition of a 65% stake in IVF specialist group City Fertility Centre of Australia.

By last week, ties have gotten a lot warmer and closer. 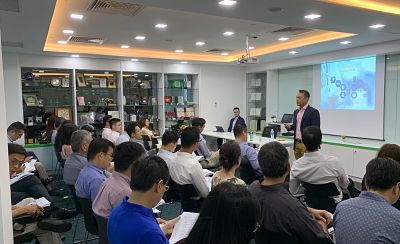 Full house at FY18 results briefing by Dr Beng Teck Liang, CEO of SMG.
Photo by Kamal SamuelIt was announced that CHS would increase its stake in SMG to 24.13% through a $50m purchase of partial stakes of 4 key SMG management staff and one substantial shareholder.

If the loan is converted in full on maturity one year later, CHS's stake in SMG will rise to 27.69%.

That translates into an average price of 55 cents. (see table; CHS's initial stake was purchased two years ago at 50 cents apiece)

The convertible loan from CHS is subject to shareholder approval at an upcoming EGM.

(There is likely to be discussion about the conversion price being 42.3 cents, which is a 3.5% discount to the volume weighted average price of SMG shares traded on the 30 market days preceding the convertible loan agreement).

If approved, and if the loan is eventually converted fully, CHS's stake of 27.69% comes within striking distance of the 30% threshold for a mandatory general offer for SMG.

It's understood that CHS has no takeover intent.

In fact, even though CHS would soon become the single largest shareholder of SMG, it's understood that it would leave SMG to pursue its business and Dr Beng to stay firmly in the driver's seat.

But there's plenty that CHS and SMG will come together to do which would accelerate SMG's growth.

Here's an excerpt from the press release:

"...the expanded strategic relationship will leverage CHA’s expertise in personalized anti-aging care and Korea’s renown in dermatology and aesthetics to further expand SMG’s strong market leadership in key verticals such as oncology and aesthetics. For example, the strategic relationship envisages close collaboration between Chaum Wellness Center, CHA Evercell beauty rejuvenation programs and SMG’s SW1 aesthetics business to provide patients with a seamless premium care experience. There are also expected to be patient synergies between SMG’s oncology business and CHA’s Tokyo Cell Clinic, amongst other services. The CHA-SMG combination is expected to lay the foundation for Asia-Pacific’s first dedicated platform for comprehensive wellness care covering the entire anti-aging, beauty and preventive care spectrums."

The SMG press release has an abundance of information on CHA as well as its relationship with SMG. Click here.

0 #1 Thomas Vibin 2019-02-23 12:25
not a good news, with SSH reducing stakes. looks to me cashing out in process, albeit with a nice packaging
Quote
Refresh comments list
NextInsight.net

We have 254 guests and no members online