GEO ENERGY: "Stock price will be higher before too long"

Republished from ThumbTackInvestor with permission

I’ve been asked why I’m confident their production will recover from here. So let me provide a little update on the investigative work I’ve been doing on Geo.

As mentioned, both Indo and Chinese coal prices indices have been hitting new highs:

That much is known. The production volumes, though, is the big unknown.

Having reported below average production volumes in Q1 and even more disappointing figures in Q2, it seems that participants are scared away by the failure of Geo’s management to meet its guidance thus far for 2017.

I think the market’s worries are justifiable but short-sighted.

Since we know the prices are at all-time highs, I sought to try to investigate the potential volumes in Q3. The weather is supposed to be much better in Q3, and production volumes are supposed to increase going into the 2nd half of 2017.

To do so, I targeted BUMA. Geo’s mining arm was divested last year, and BUMA now does all the mining for Geo. 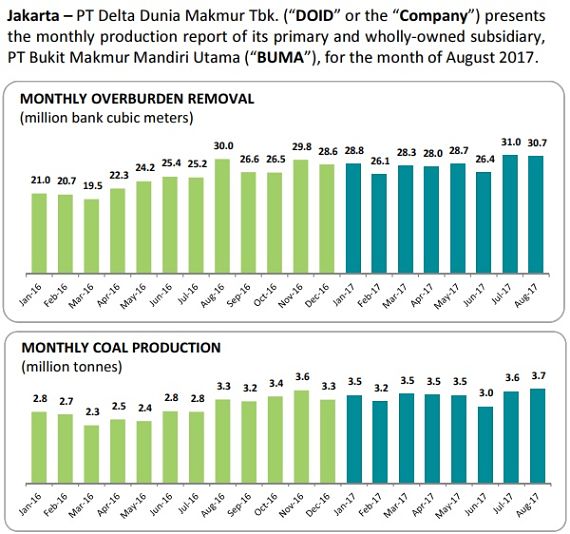 We can clearly see a recovery and increase in production volumes in July and August 2017. BUMA itself said so in its monthly report:

“Year-to-date overburden removal grew by 21% YoY to 228.0 million bcm and coal production grew by 27% to 27.4 million tonnes, despite unfavorable weather in the first half of 2017. Improved weather has led to better volume achievement in the first two months of third quarter 2017.”

Of course, BUMA doesn’t just mine for Geo, so we can’t take the data wholescale. BUMA mines for several other coal mine operators, so one could argue that this increase could be for the other mines, and Geo’s SDJ could still suffer from volumes that are below expectations.

To clear that doubt, I analyzed BUMA’s mrq financials.

Amongst all of BUMA’s clients, Geo’s SDJ mine is the 2nd largest contributor to revenues as of 1H2017, accounting for 12% of BUMA’s revenue:

Berau Coal was by far the largest contributor.

Still, it indicates that it’s likely that BUMA’s increased production volume reflects that of Geo’s SDJ site, as SDJ is the 2nd largest contributor of revenue for BUMA.

On top of that, Adaro Energy has a coal mine just north of SDJ: 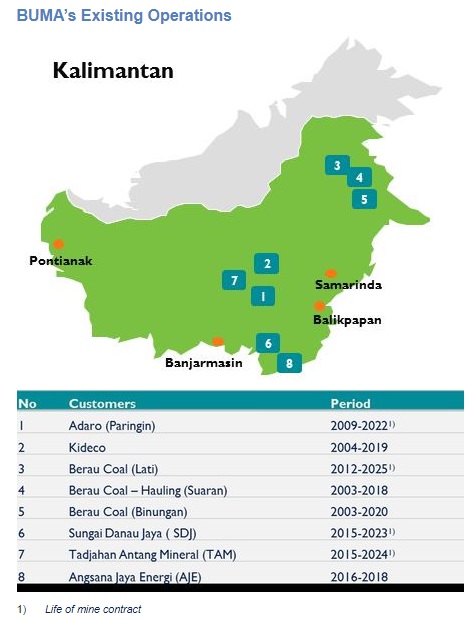 And as recently as early Sept 2017, Adaro Energy reaffirmed their full year production volume guidance of between 52-54mil tonnes. 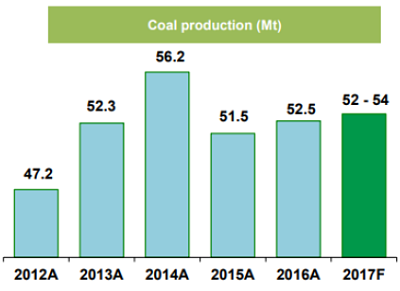 This is the same guidance they gave at the start of 2017.

If production volumes are affected, they would’ve cut guidance.

Since the site BUMA mines for them sits just north of SDJ (and AJE, Geo’s other smaller mine that they are helping to manage), it’s not unreasonable to extend their fortunes to that of SDJ’s as well.

Now, there are certain risks for Geo Energy that I am watching closely too.

I won’t go into detail as this post is getting too lengthy, but basically Indo’s export volumes are dropping. This means that proportionately, more of Indo’s mined coal has to be consumed domestically. This is exactly what Indo’s gov wants to achieve.

Geo is vulnerable: If they have to increase their allocation of mined coal for domestic usage, their margins will certainly be impacted.

All in, I’m expecting more good news ahead from increased production volumes, new offtake agreement for TBR mine site and settlement of their MTN loans before Jan 2018.

We have 697 guests and one member online